The Chinese University of Hong Kong’s Centre for Communication and Public Opinion Survey (CCPOS) conducted a public opinion telephone survey on Hong Kong’s point-to-point transportation services. The survey, which has a focus on Hong Kongers’ view on both Uber and the Government-proposed Franchised Taxi Scheme, as well as whether the Government should regulate ridesharing. 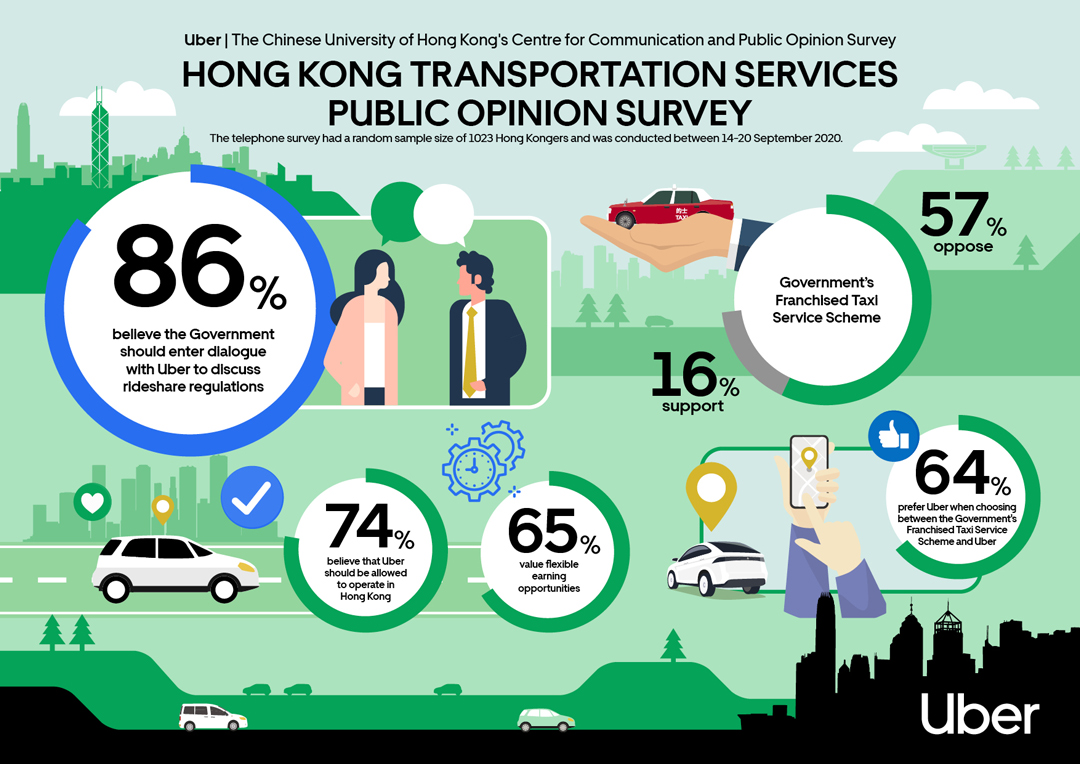 The survey reveals only 16% support the scheme; on the other hand, 64% of Hong Kongers say that they would choose Uber as their preferred point-to-point transportation option.

The Government first introduced the Franchised Taxi Service Bill in 2016 to meet the demand for higher-quality personalised point-to-point transportation with online features.

“We are once again pleased to receive Hong Kongers’ overwhelming public support for Uber. While Uber and the Government share a common goal — fostering a competitive and high quality point-to-point transport industry by providing an additional choice other than ordinary taxis — the Franchised Taxi Scheme is not the solution when it comes to serving Hong Kongers’ needs. Most importantly, the survey clearly indicates that the majority of Hong Kongers do not support this scheme, and would prefer Uber,” said Estyn Chung, General Manager for Uber Hong Kong.

The Legislative Council failed to pass the bill in the last term and the Government has said that it would listen to the views of the public before deciding whether to reintroduce the Bill. Uber is pleased to share this research with the Government to demonstrate the public’s very clear view on the proposed policy.

The HKSAR Government announced in 2017 the desire to make Hong Kong a world-class smart city to attract global businesses and investments, and to help Hong Kongers increase quality of life. However, when asked about the level of Government support for innovation and technology, 85% of Hong Kongers believe that the Government is not doing enough, which represents an increase from 78% in a similar poll in 2017. 59% of respondents also feel that the Government is over-protecting vested interests in existing industries when it comes to promoting innovation and technology.

In May 2020, Uber announced its offer to move its regional headquarters to Hong Kong on the condition that the Government is willing to make progress on ridesharing regulations. In response, 86% of Hong Kongers agree that the Government should enter into dialogue with Uber to find ways to legalize ridesharing to ensure more jobs and opportunities are created in Hong Kong.

In the survey, 65% of respondents appreciate the value of flexibility (self employment, flexibly earning and no fixed working schedule) during the current economic downturn. In another recent survey of Uber driver-partners, we learned that Hong Kongers turn to Uber to offset losses caused by the pandemic (28%) and to cover ongoing family expenses (24%).

Estyn added, “Uber is here to help earners earn flexibly, and to provide safe and reliable rides to Hong Kongers. With that in mind, the public agrees that there should be dialogue between Uber and the Government to find a resolution to the current impasse over regulations for ridesharing. The Government said it would consider the views of the public before it decides whether to proceed with the scheme in the next term of the Legislative Council. We therefore continue to urge the Government and industry stakeholders to consider the findings of this research, and open the door for an open conversation with us.”

In addition to the overwhelming majority of Hong Kongers who want ridesharing regulated, some took the extra step of sharing their support directly with legislators and the Government. Recently,  25,000 signatures of Hong Kongers who actively supported rideshare regulation was delivered to the Chief Executive ahead of the Policy Address.

Commissioned by Uber Hong Kong, the telephone survey was conducted with a random sampling method through the Computer Assisted Telephone Interview system. A total of 1,023 Hong Kongers aged 18 years old and above were sampled (720 through local fixed line and 303 through mobile) from 14 September to 20 September.