Uber has collected 24,853 signatures (to date) in support of ridesharing to the Chief Executive ahead of the annual Policy Address. The signatures have been collected at regulateuber.hk since June 2020, where Hong Kongers were able to show their support to regulate ridesharing so Uber could bring investment and jobs to Hong Kong. Hong Kongers also used the website to message their representatives in the Legislative Council, submit to the Chief Executive’s policy address consultation, and voice their opinions to the Secretary for Transport and Housing, calling for regulations for ridesharing and the provision of certainty for Uber’s 14,000 active driver-partners.

Uber has operated in Hong Kong since 2014 as one of Uber’s first international cities. Over the course of the last six years, Uber has served over a quarter of the population in Hong Kong and facilitated millions of safe and reliable rides. However, despite Hong Kong’s global outlook and long history of innovation, Hong Kong remains one of the last cities in the world that has not updated its transport rules to support ridesharing. We call on the Government to modernise the current regulatory framework so businesses like Uber can continue to operate, make investments and create jobs for Hong Kong. 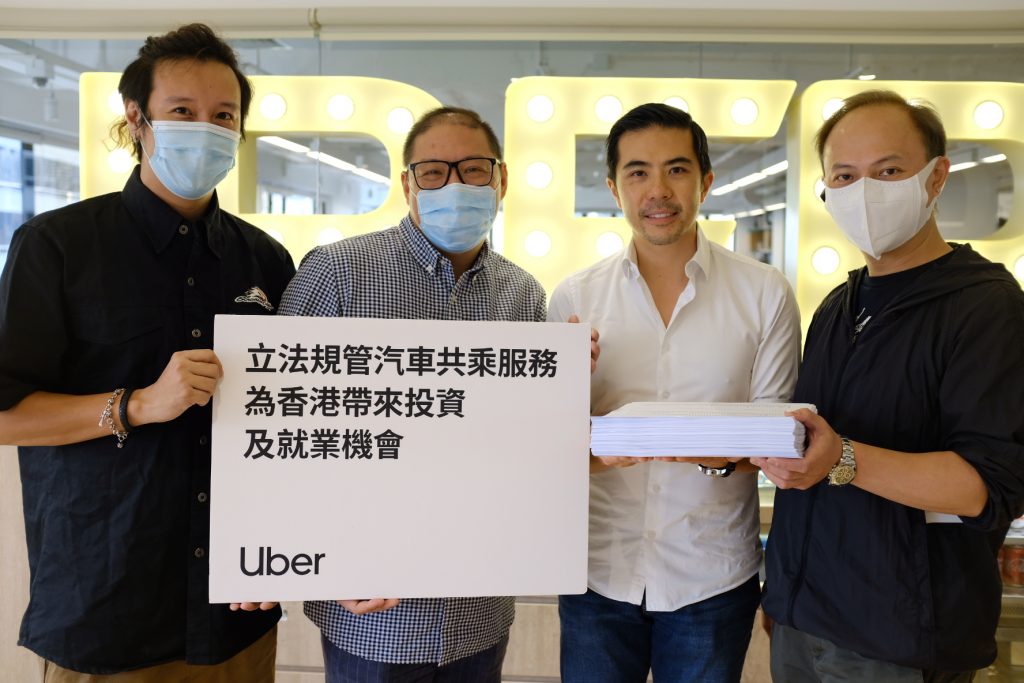 Estyn Chung, General Manager of Uber Hong Kong, holds petition of close to 25,000 signatures
with Uber driver- and delivery-partners who rely on Uber to earn flexibly

Members of the public stated that:

“I believe that Hong Kong should welcome Uber’s offer to invest, and that the Government should make regulating ridesharing a priority, because this will create jobs that Hong Kong needs. We deserve the same economic opportunities and high-quality services as those in other advanced cities. Furthermore, I don’t believe that it is fair that under the current policy framework drivers have faced prosecutions. These are difficult economic times and rather than stifling innovation, we should be welcoming technology that provides opportunities for us to earn and raise Hong Kong’s productivity. Please consider taking urgent action so that we can seize the opportunity of welcoming Uber.”

“At a difficult time for the city and for Uber, we have been overwhelmed by the positive response and messages of support from members of the public. Not only do we know a quarter of the population who has taken a ride with us support the regulation of ridesharing, but we have now seen that many feel so passionately about it that they’re willing to write directly to the Government to urge them to act. The cloud of regulatory uncertainty that hangs over 14,000 Hong Kongers who rely on Uber to make up for lost income has darkened significantly in the midst of one of the worst global recessions in living memory. We have in the last six years, and will continue to urge the Government and industry stakeholders to meet with us. With constructive dialogues, we can partner with the Government and stakeholders to realise Hong Kong’s Smart City ambition, so the people of Hong Kong can truly tap into the advantages of a sharing economy. ”

“It’s heartwarming to see so much support for Uber from the public. The pandemic has been challenging for so many people and it’s encouraging that we haven’t been forgotten. There aren’t many options for flexible working like Uber in Hong Kong and we need it now more than ever as the pandemic has caused so much disruption in the economy. I hope that the Government considers both the drivers and the thousands of members of the public who want Uber to stay in Hong Kong.”

“I’ve been driving for Uber since 2015 and it’s fantastic to see that the people of Hong Kong value us and want us to be able to keep driving in the future. This means so much for me and my family, as Uber has provided me with an opportunity to find ways to support my family during the pandemic. I hope that the government listens and progress can be made on protecting Uber driver-partners.”