The availability and affordability of rides on the Uber network provide the residents of Uber-enabled cities with an important alternative to drunk driving. Each drunk driver who is replaced by a safe, professional, and sober partner on Uber’s platform represents a considerable contribution to the welfare of a city such as Chicago. Until now, this benefit has been anecdotal. In order to show how much Uber’s entry in markets has reduced local drunk driving, we built a simple econometric model that uses publicly available data.

In a general purpose research effort, we looked at Seattle as an example city with the most readily available data. Every city differs, but we find that this research strongly suggests that there is a relationship between people’s decision to drink and drive and increased transit options. We can reasonably extrapolate these results and apply them to what we consistently hear from our riders in Chicago and elsewhere.

We estimate that the entrance of Uber in Seattle caused the number of arrests for DUI to decrease by more than 10%. These results are robust and statistically significant. The diagram below illustrates the “Uber effect” relative to the baseline of DUIs. We also included the measured impact of legalizing marijuana (see the Details section below for more on this). 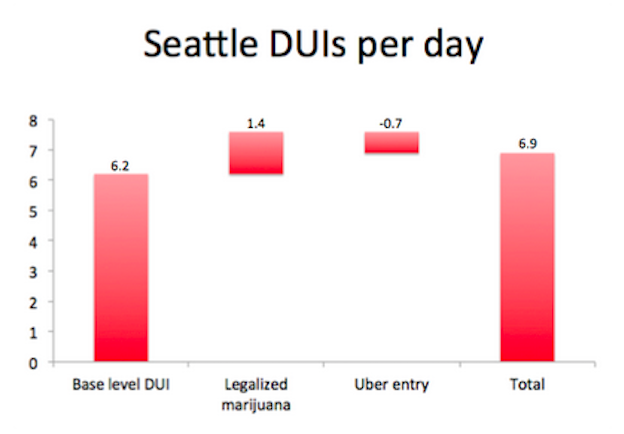 In order to begin studying this important but difficult question, we have assembled drunk driving data from the arrest data made available by the police departments of both San Francisco and Seattle. In San Francisco, the data is available from the city’s general crime data on their  website.1  We filtered this for DUI according to Category “DRIVING UNDER THE INFLUENCE.” This includes non-alcohol drug arrests for driving under the influence, which we leave in in the main analysis (it makes almost no difference if we filter for only alcohol-related DUIs). Seattle has a traffic crime database2, that we filtered for DUI as well.  Seattle’s data does not distinguish between alcohol and other drug-related DUIs. Both data sets report a timestamp for each arrest; we accumulated arrests by day in the regressions below.

As a first step, we estimated a simple regression discontinuity that tested whether the incidence of DUI changed in Seattle before and after Uber entered, controlling for a time trend, day of the week effects, and the legalization of marijuana (which seems to have caused a spike in DUI3).

*Note: In the chart above, the intercept reflected is the average of days for simplicity of display, and the regression in Table 1 displays the intercept for Sunday.

By this approach, Uber is responsible for approximately -.7 DUIs per day, or more than a 10% reduction overall. However, this approach is inherently weakened by the fact that many things could have caused DUI to go down around the time when Uber entered. In order to test the robustness of this estimate, we use San Francisco as a control city in a “differences-in-differences” framework. The result is consistent: 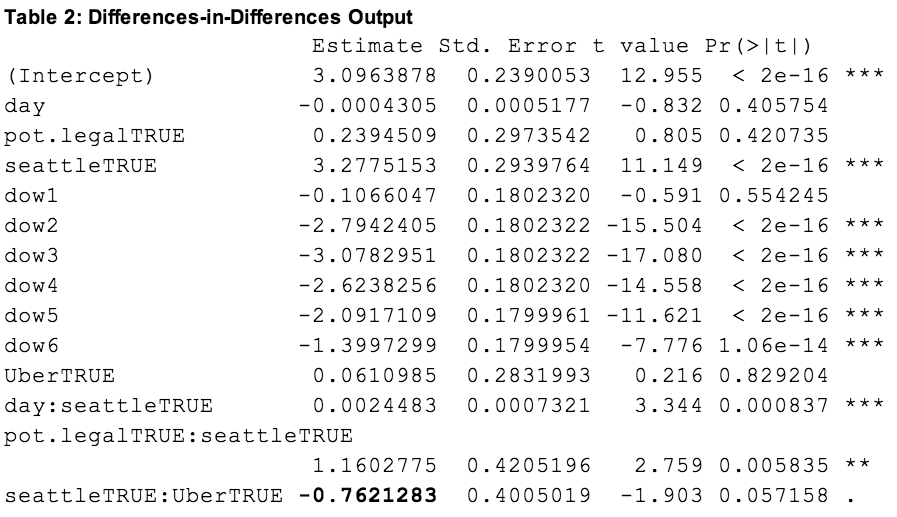 The advantage of the differences-in-differences approach is that it filters out any random shock that is common to both Seattle and San Francisco, whether or not we observe that randomness in any of the variables in our data sets. While it’s still possible that something unrelated to Uber’s entrance into Seattle coincidentally caused a change in Seattle’s rate of DUI, this approach rules out most coincidences that occurred at a national or regional level.

This simple econometric study provides evidence that Uber’s network of safe, readily available rides have a meaningful and measurable impact on drunk driving in cities in which Uber operates freely. While there is plenty of room to explore this topic in future studies, the data confirms the intuitive claim, backed up by countless anecdotes, that potential drunk drivers will choose other options, like rides with Uber, when they are convenient, affordable, and readily available.

Earn more with Capital One on Uber Eats

Teaming up with ServiceNow to help businesses plan employee commuting