New cars hit the streets of Los Angeles every day, and nearly 75% of Angelenos drive alone. Unsurprisingly, it’s estimated that the average commuter spends 80 hours a year stuck in traffic¹ while the average daily commute now takes nearly 30 minutes². This kind of congestion is bad for productivity in Los Angeles and the resulting pollution undermines everyone’s quality of life.

It’s why we’re excited to mark one year since the launch of uberPOOL in Los Angeles.  uberPOOL enables people going to the same place at the same time to share the journey.  It’s all about getting more butts into fewer cars. This means cheaper rides for passengers and less congestion over time.

Here’s how it works.

uberPOOL is a proven model.

Cheaper rides for passengers: uberPOOL is more affordable because the cost of the trip is shared.  Fares can be as much as 30% cheaper than uberX, and the average trip on uberPOOL costs just 10 bucks.

Less congestion: uberPOOL is a convenient way for people going in the same direction at the same time to share the journey. This helps cut congestion and pollution.  And because uberPOOL is cheap and easy to use, over time it offers a credible alternative to car ownership. If you can press a button and get an affordable ride across town within minutes at any time of day or night, why bother to own a car at all? 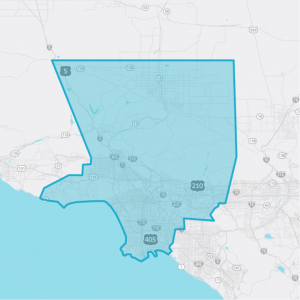 uberPOOL is helping Angelenos go further and do more at the push of a button—but we’re just getting started. We look forward to working together to build a future with fewer cars, more shared rides, less traffic and smarter cities.

We can’t wait for what’s to come and what we can do—together.