Meena Harris is a natural problem-solver. As a lawyer, her approach to finding solutions led her to form the Phenomenal Woman Action Campaign, an organization that raises money for women’s causes, which eventually led to her joining Uber as Head of Strategy and Leadership. Now Meena is combining her role as a leader at Uber and her drive to support women to help move Uber forward.

A year ago, the Phenomenal Woman Action Campaign’s first action was the sale of Maya Angelou–inspired “Phenomenal Woman” T-shirts. The initiative was supposed to last just a month, but it quickly took off. She initially assumed that the organization would sell a few hundred T-shirts in its first month but was blown away by the enthusiastic reception: 2,500 shirts sold on day one. Proceeds from the shirt sales go to organizations such as the Dr. Maya Angelou Foundation, Essie Justice Group, Girls Who Code, Higher Heights, National Latina Institute for Reproductive Health, Planned Parenthood, and the United State of Women.

“Women are looking to come together in a positive, empowering environment,” Meena says, “and it’s important that we create those spaces for them.” 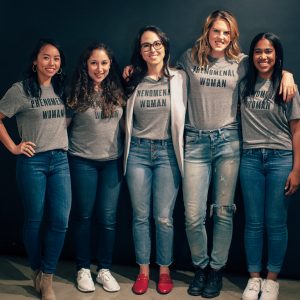 As awareness of Phenomenal Woman grew, it became about more than a T-shirt. To deepen engagement with women professionals in the Bay Area, Phenomenal Woman began a tech tour, visiting major companies such as Airbnb, Google, Salesforce, Twitter, and Uber.

The first community event Phenomenal Woman hosted at Uber was a fireside chat to highlight black women in leadership, and it also represented a first-of-its-kind company wide recognition of Black Women’s Equal Pay Day. Now not only has the event continued, but it’s expanded to include the Black Women’s Power Lunch—a small setting where Black women employees at Uber can have candid conversations with women leaders in business.

Engagement with other tech companies usually consisted of one signature event, but Uber asked Meena for help in setting up several similar events in Atlanta, Los Angeles, New York, and Washington, DC. In her initial meetings with Uber employees, Meena was inspired by the kindness, quality of work, and, most of all, the enthusiasm and dedication of employees to making Uber better.

Before she knew it, Meena was interviewing with Uber and soon became Head of Strategy and Leadership, a role that put her in a position to help employees grow, learn, and lead.

“The tech tour was how I initially came to Uber,” Meena says, “and it’s an honor to be involved in helping to move Uber forward.

“I’m excited to focus on how Uber can continue to bring more opportunities to women. Whether you’re just entering the workforce, a new mom, or simply want to feel heard, I hope to help move Uber in a direction where all women feel supported, no matter what. That’s what I’m looking forward to most, and I’m confident that with all the phenomenal women at this company, we’ll make it happen.”

Where to spend summer in the Hamptons

Your Guide to the new Loading Zones around Market Street