On Monday, the New York Times published an article with a simulation of a rideshare company that included the assertion that “faster pickup times for riders require a greater percentage of drivers to be idling unpaid”: 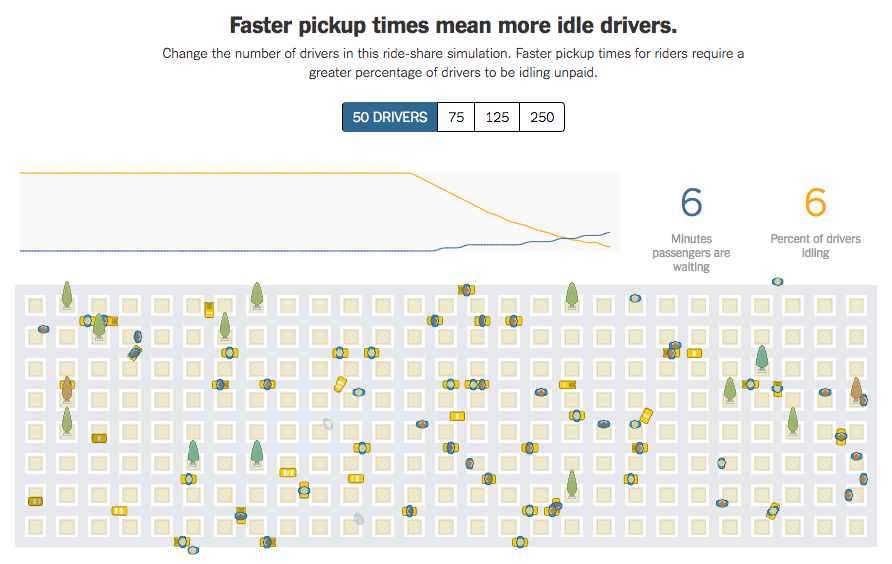 This is simply not true—and had the Times asked us whether it was, we would have explained the reality of what happens when Uber grows in a city: riders enjoy lower pick-up times and drivers benefit from less downtime between trips. It’s a virtuous cycle that is widely acknowledged in business and academia, and which is backed up by data. 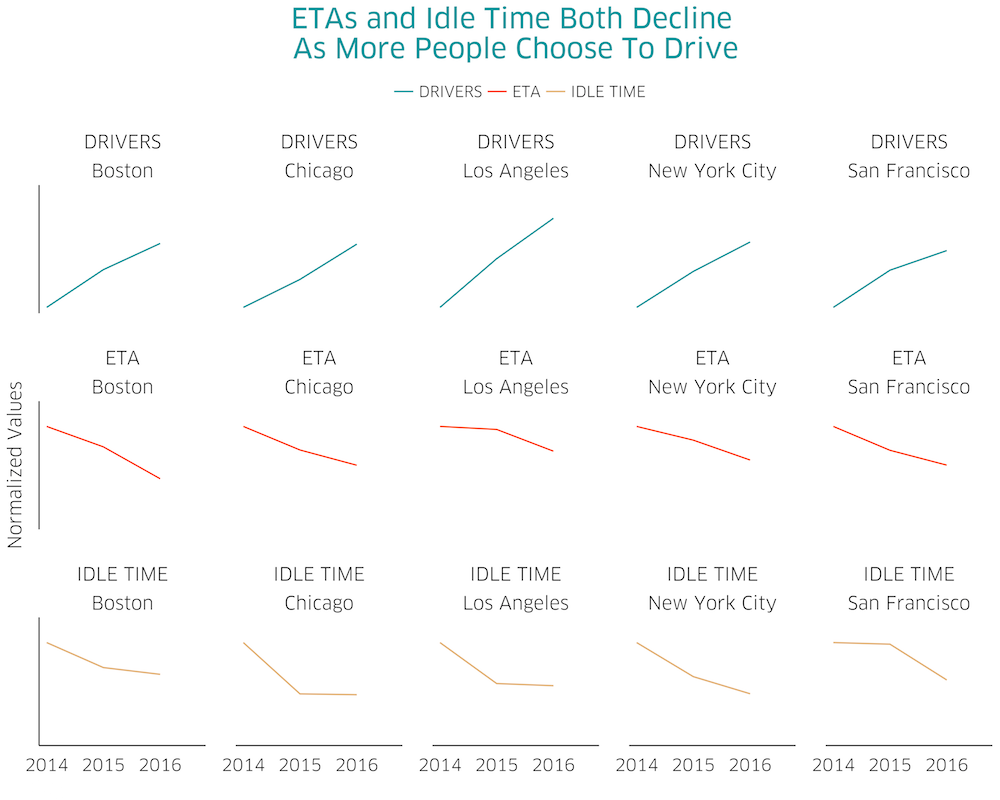 Graphic shows changes over time in the five largest US Uber markets. The same month each year (June) is shown to adjust for seasonality. “ETA” reflects the average wait time for a rider requesting a ride. “IDLE TIME” reflects the percentage of each hour spent signed into the app that a driver was not with a rider, and was calculated as the median across drivers. “DRIVERS” represents the number of active drivers per month in a city completing at least one trip a week. Numbers have been normalized for comparison.

How is this happening? First, as the number of passengers and drivers using Uber grows, any individual driver is more likely to be close to a rider. This means shorter pickup times and more time spent with a paying passenger in the back of the car. In addition, new features like uberPOOL and Back-to-Back trips have meant longer trips, while incentives to drive during the busiest times and in the busiest locations help keep drivers earning for a greater share of their time online. And that should be no surprise: drivers are our customers just as much as riders. So although the Times article suggests that Uber’s interest is misaligned with drivers’, the opposite is true: it’s in our interest to ensure that drivers have a paying passenger as often as possible because they’re more likely to keep using our app to earn money. (And Uber doesn’t earn money until drivers do.)

Maximizing the efficiency of cars on the road also helps cities use existing infrastructure more efficiently, while minimizing congestion. Indeed, research from 2016 showed that Uber was already more efficient than pre-existing on-demand options, and we’re excited about those trends getting better over time.

So how did the Times graphic get it so wrong? While it’s hard to know for sure as its assumptions are not laid out transparently, it appears to suffer from at least two flaws:

So what does it all mean? Happily, evidence to date has shown that all three things can happen simultaneously: we can grow the overall number of people who have access to work with Uber while reducing wait times for riders and reducing the amount of time drivers spend idling. That’s an exciting set of evidence for the future of on-demand transportation.