Here at Uber, things are happening pretty quickly. What launched from humble beginnings in San Francisco in 2010 grew to a global service spanning 3 continents and the world’s top cities in 2012. By the end of 2013, that number had more than quadrupled, and in early 2014 we hit the 100 city mark (and we’re just getting started).

Now might be a good time to take a good look at the international Uber network that’s beginning to develop between cities. Specifically, let’s examine our Uber riders that travel in style not just in 1 city, but multiple cities. I’ll be referring to these globetrotting individuals as Uber jetsetters. How many of these folks are actually out there?

So which countries have the largest proportion of well-traveled Uber riders? 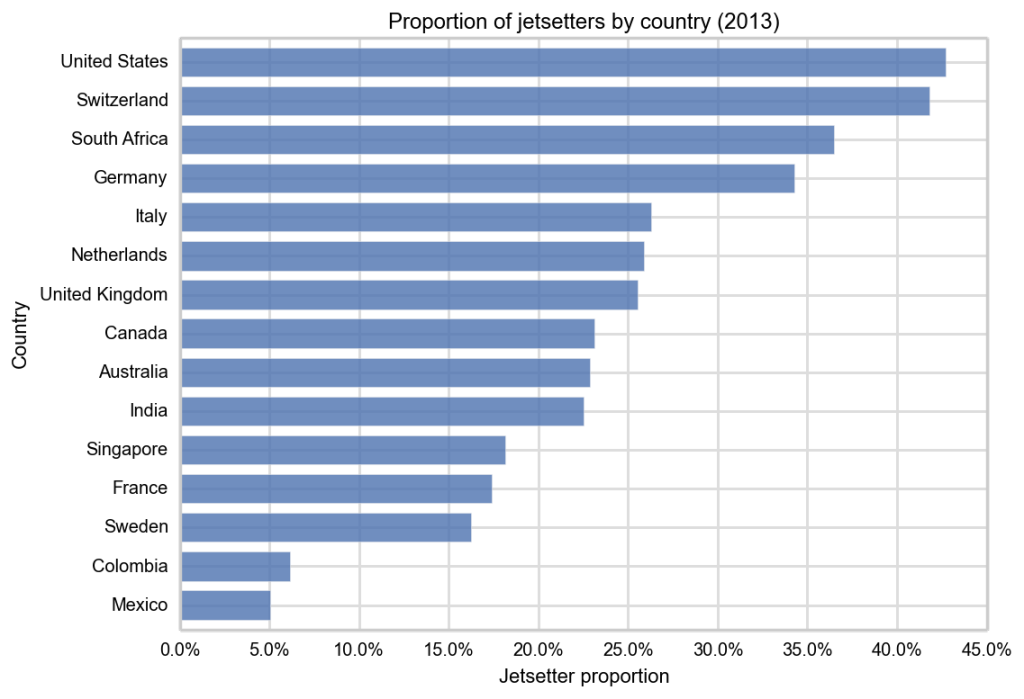 The United States takes the top spot, followed by several European countries like Switzerland, Germany, and Italy, as well as South Africa.

One way to think about the developing Uber network is as a graph. This idea isn’t new to Uber; we’ve already taken a look at intra-city networks in previous blog posts (here for San Francisco and here for Washington DC). But now we have enough data to start looking at the connections between entire cities in addition to neighborhoods. Thinking about it this way, each city becomes a node in our Uber-graph. Nodes are bound together by their edges, which are the number of users that have taken an Uber in both cities (the users that the two cities “share”). More shared users means a stronger connection and a greater edge weight. Unlike the connections between neighborhoods of a city, which have a starting point and an ending point because they correspond to actual trips, these connections are undirected because they correspond to actual people.

If we had a surefire way to pin down each user’s home city, it would become a directed graph, but this quickly becomes a tricky proposition because different users have different use patterns (some might use Uber only in their home city, while others might use it only when away on trips). An adjacency matrix is one way to visualize a network like this. In our adjacency matrix, every row is a city and so is every column. Because the cities in the rows and the cities in the columns are the same (and we always keep them in the same order), this is an example of a triangular matrix, meaning that the top-right and bottom-left of the matrix contain the same information, just flipped.

Is your high school or college linear algebra class coming back to you yet? Check it out for yourself below! The weight of each cell corresponds to the strength of the connection between the city of the cell’s row and the city of the cell’s column. If all you see is a message box, make your browser window as big as you can — we are in lots of cities… and this is just a subset!

Please embiggen your browser window or switch to a desktop to see the viz here.

There’s a lot of information here, but a lot of patterns as well. Let’s take a guided tour.

Some easily explainable things stand out right away. For example, the connections between Sydney and Melbourne; Johannesburg and Cape Town; and Rome and Milan make a lot of sense (and help to explain why South Africa is so well-represented in our earlier jetsetter competition). If you keep poking around, there seems to be a clear East/West Coast clustering. It seems evident that cities that are physically closer together share more users. If this is a little too “Captain Obvious” for your taste (it was for mine), we can normalize the weights by distance between cities, penalizing closer cities or giving a boost to more distant cities, depending on your point of view.

Find the dropdown menu at the top right and select “Normalized by distance” to see this for yourself (go ahead, I’ll wait). Now that we’ve “corrected” for some notion of physical distance, a few city pairs have dropped out, like the 3 pairs I mentioned previously, plus some others like Baltimore/Washington, DC and Chicago/Indianapolis.

Now find the dropdown menu at the top left and select “Order by launch date”, and also “Normalized by distance & total users” while you’re at it. This view reveals how cities develop their global network over time; the longer Uber has been in a city, the more sister cities it has time to develop relationships with.

Orange County, Palm Springs, and New Jersey are especially ahead of the curve. They’ve developed global networks more quickly than other regions that launched around the same time. Another effect of normalizing by total users is evident in the strong connection between Park City and Cannes. Even though Uber isn’t even in these cities year-round, our pop-up coverage of the film festivals hosted by these cities is clearly drawing much of the same crowd.

How about one last bonus viz before I leave you to your own exploration? A major shortcoming of the adjacency matrix is that it’s hard to see the proportion of users that a given city shares with various other cities. We can start to get this picture by using a chord diagram like the one below. I’ve gone ahead and removed all but the most highly connected cities (those with the highest degree centrality), to avoid looking at a giant hairball. Interestingly, some of the most highly connected cities by this metric don’t necessarily have a lot of jetsetters; they just happen to be popular with a lot of other places.

Hover over a city to highlight its strongest connections. Note that a small bit of random “fudge factor” has been introduced to each chord in order to keep our precise numbers confidential.

Please embiggen your browser window or switch to a desktop to see the viz here.

Now, this is all interesting and a pretty cool way to visualize complex ridership data, but as Miles Davis put it, “so what“? Uber’s jetsetter population isn’t just a neat data trick. It’s an indicator of Uber’s ubiquity and ease of use.

Take another look at the above chart. Those cities represent 3 continents, 6 languages (8 if you want to be technical and include English variants), and 6 different currencies — but one Uber experience. Regardless of where you live, Uber works the same. These graphs show that people respond to that. Whether it’s traveling  to the next town over, or globetrotting to film festivals (check out Cannes and Park City), Uber’s the best way to go.

P.S. If you got a kick out of this, Uber is hiring for lots of roles…including the Science Team!