Since last October, we have been honored to recognize U.S. driver-partners who have gone above and beyond with our “Sixth Star Award” program fueled by American Express.

Sixth Star winners will rotate between different regions around the world, including: Western North America, Central North America, Eastern North America, Latin America, Europe, the Middle East and Africa (EMEA), and Asia Pacific (APAC). Each winner will receive an Uber gift package and $1000 from American Express in appreciation of their excellent service.

We are proud to recognize the following nine partners from across the globe with a Sixth Star Award: 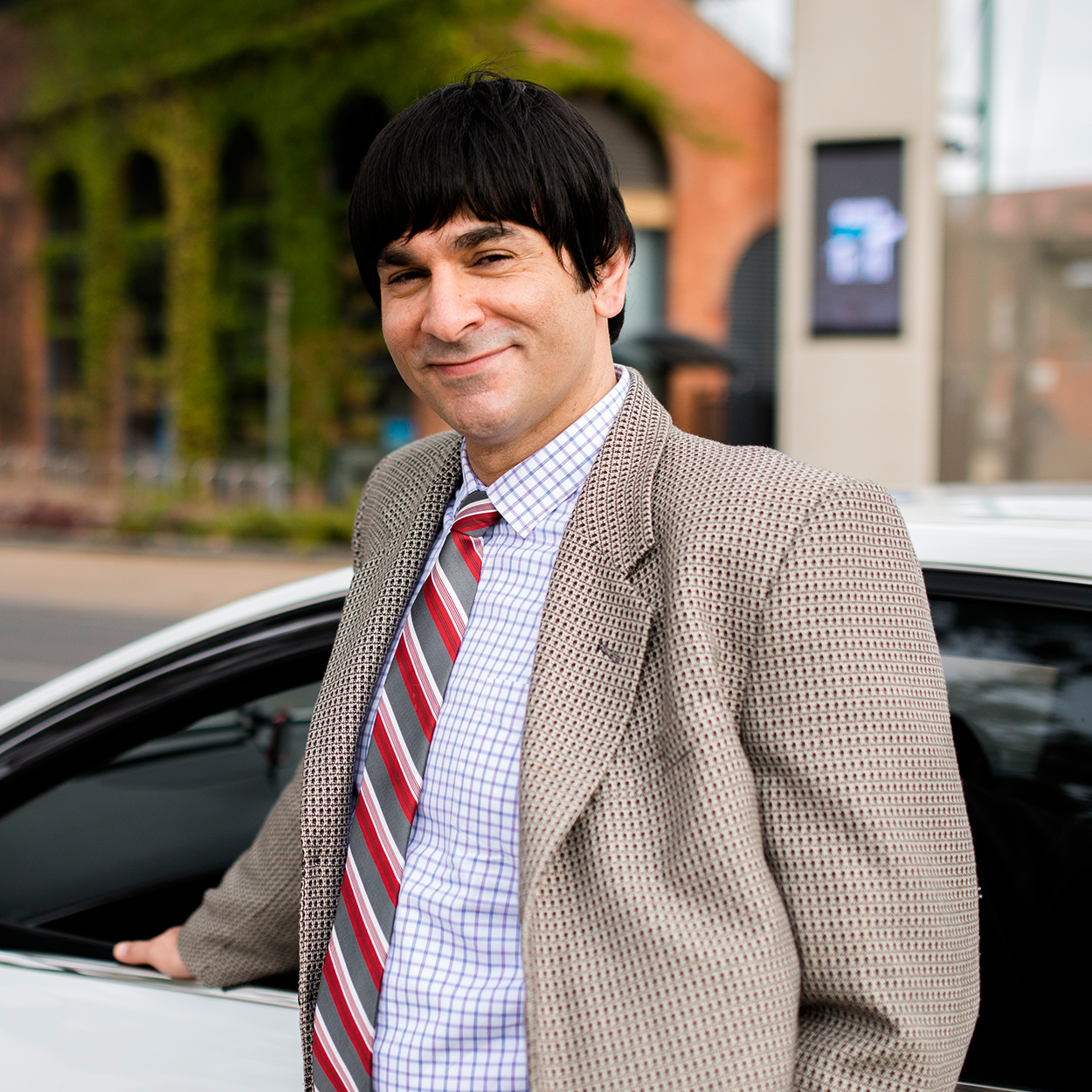 Meet Ammar from Adelaide, Australia
Ammar was awarded the Sixth Star after his rider, Jeanette, accidently left her luggage in the Adelaide car park. Thinking on her feet, Jeanette ordered an Uber and got Ammar as her driver. She called him to explain that she didn’t need a ride, but she had left her luggage behind and was hoping he wouldn’t mind bringing it to her. He gladly obliged and found the suitcase where she had left it and brought it to her destination. “He was so pleasant and polite and didn’t think twice about helping me find my luggage,” Jeanette said, “ I was thrilled he was my driver.”Upon winning the Sixth Star Award, Ammar said, “Helping people is my top priority, regardless of anything. It’s a real pleasure.” 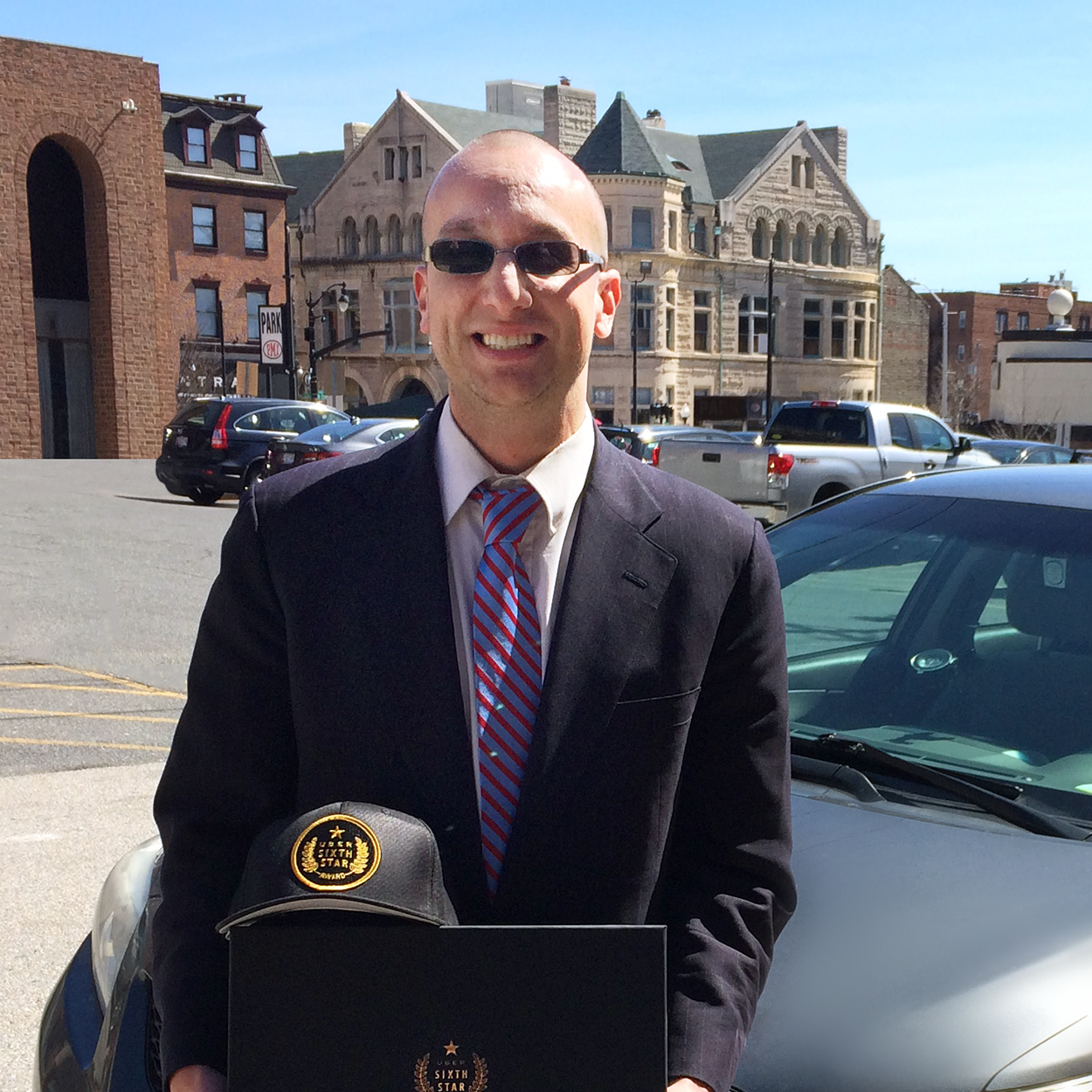 Meet Ideen from Baltimore, Maryland
In the 10 months that Ideen has been driving on the Uber platform, he has done more than 3,600 trips and achieved a 4.96 rating – higher than everyone on the East Coast. For Ideen, winning the Sixth Star Award was a welcome acknowledgment for the approach he takes to both driving and life in general. “I don’t think what I’m doing is special — I just try to be as respectful and courteous as possible,” Ideen said. “I do it in my personal life, too. It’s little things, like holding the door for people.”Ideen hasn’t spent his American Express Gift Card yet, but he has a few ideas of what he wants to spend it on, including a vacation and DJ lessons. Regardless, he’s in no rush to make the decision. “I’m kind of freaked out,” Ideen said, jokingly. “I want to savor it.” 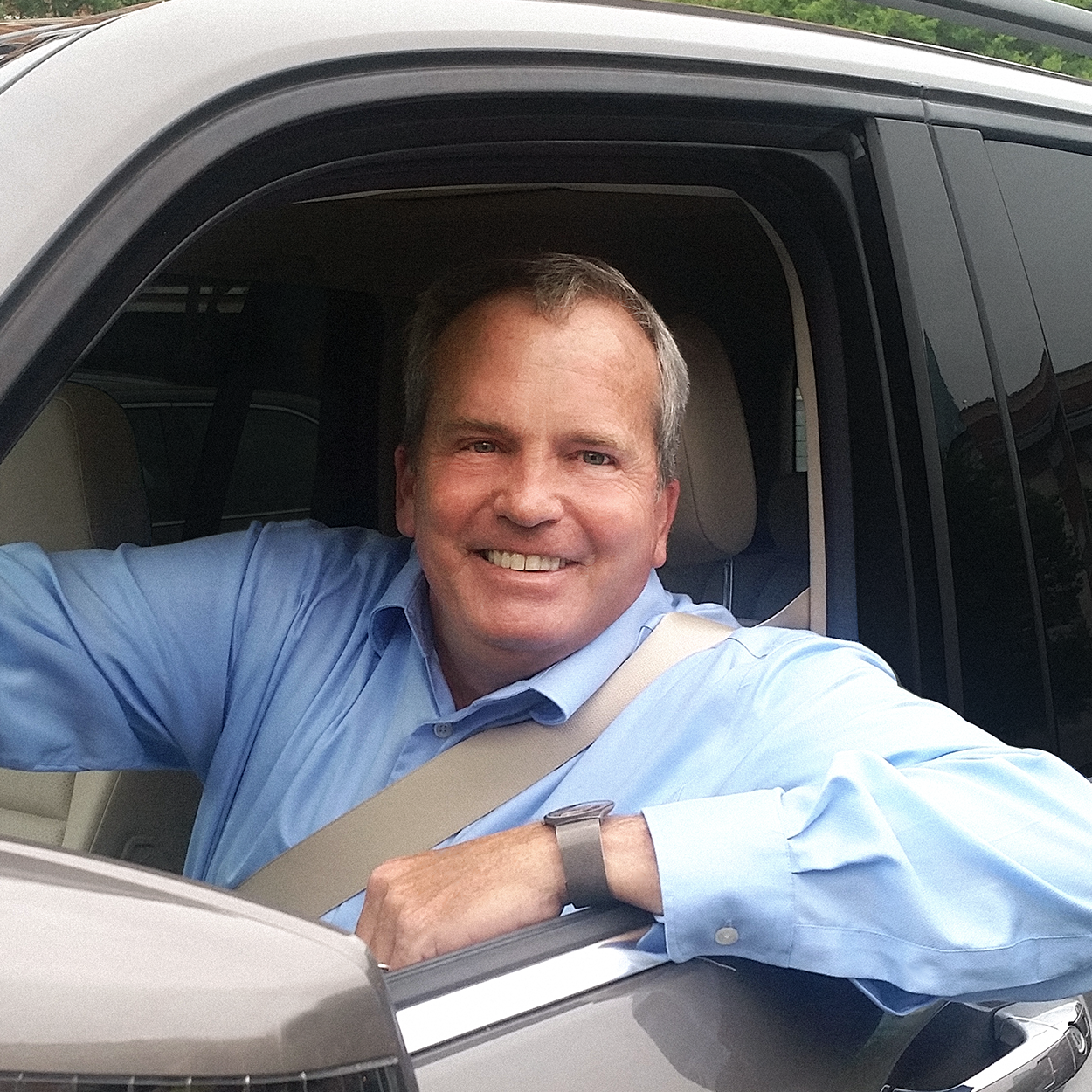 Meet Theodore from Dallas, Texas
Theodore had recently retired from his career in food service product marketing and was looking for something to fill his time when his daughter first suggested he could drive on the Uber platform in 2013. Though he eventually adjusted to driving part-time so that he could pursue a part-time career doing auto insurance claims work, Theodore has completed more than 2,300 trips and achieved a 4.92 rating – the highest for the central US region. For Theodore, winning the Sixth Star award was gratifying because he aspires to provide excellent customer service every time someone enters his car.“What sets me apart as an Uber driver is that I know that customer service is not lip service — it’s about making the person feel like they are the most important person in my car on that particular day,” he said. 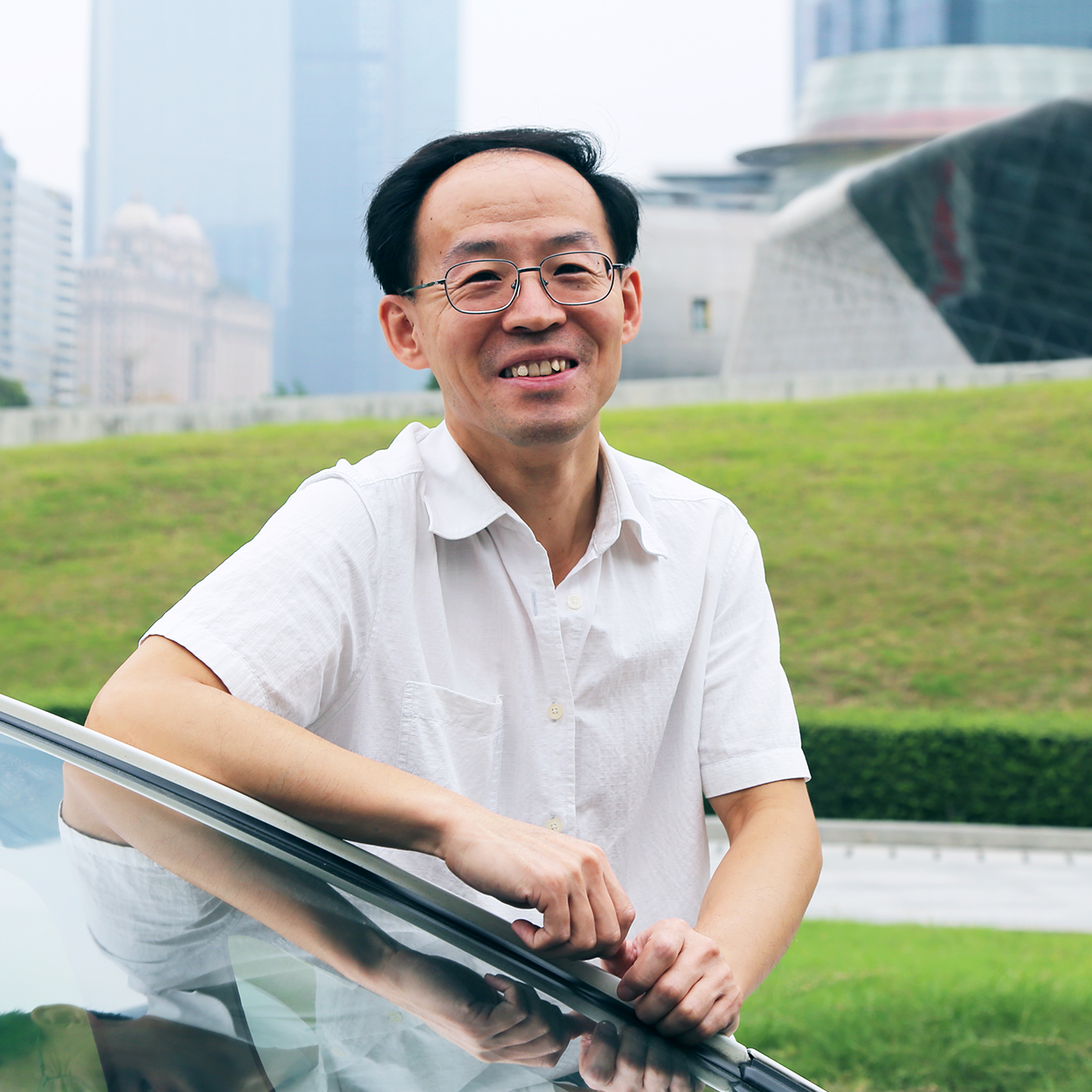 Meet Shan from Guangzhou, China
Since he started driving in July 2014, Shan Xuefeng has done more than 2,000 trips and has achieved a 4.94 rating, the highest for Asia Pacific. He enjoys working at night and meeting new people saying, “I love driving. It’s such an enjoyable experience for me.” One of the things Shan has done to provide excellent service is to watch foreign films in order to better communicate with foreign passengers he may end up giving rides to. He also drives around back lanes in his spare time to better learn the streets of Guangzhou.Shan was flattered to win the Sixth Star Award. “It’s important to think about things from the customers’ perspective in order to provide them with the best service,” he said. 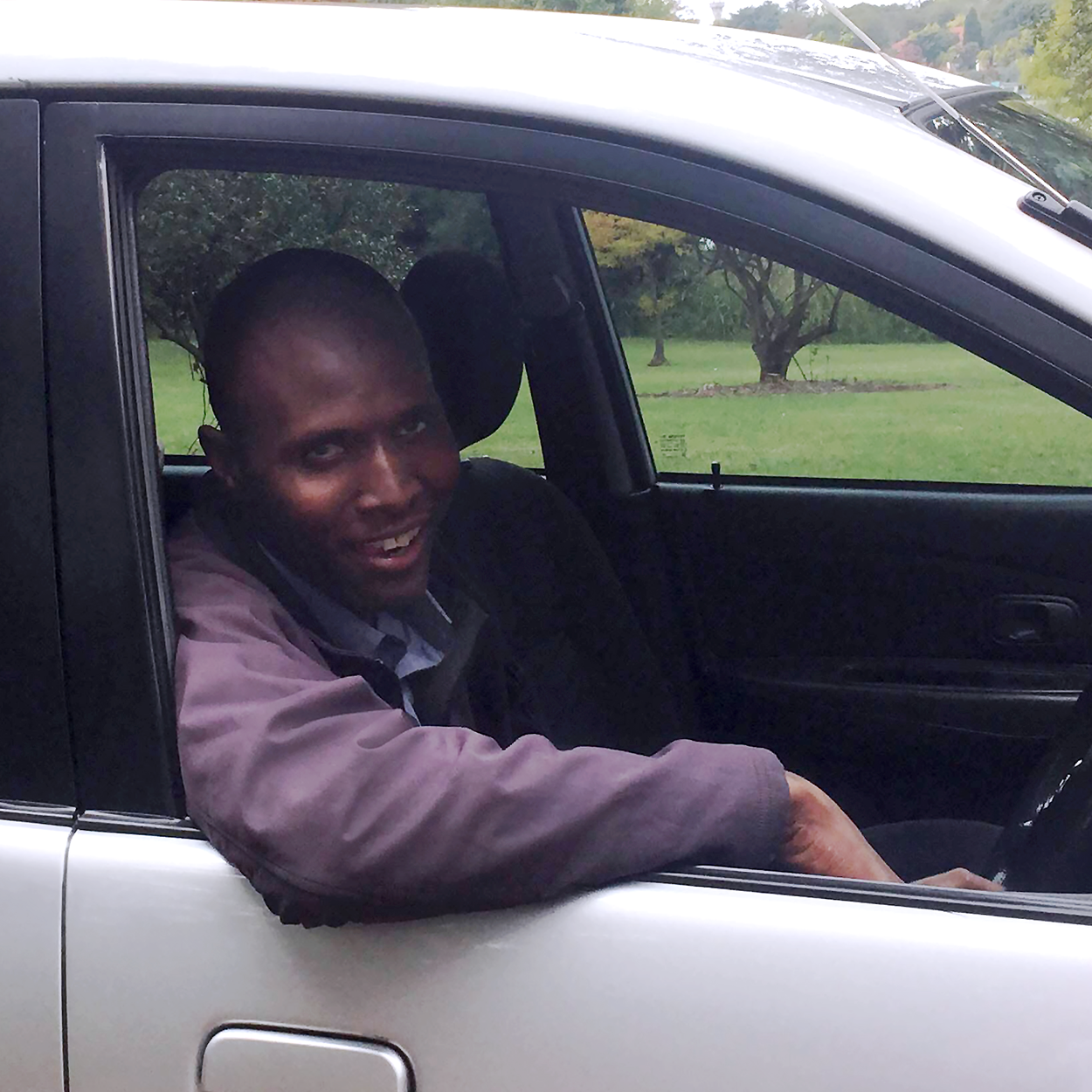 Meet Ryan from Johannesburg, South Africa
Ryan has been driving on the Uber platform since November 2014, and he was awarded the Sixth Star after picking up a rider, Carl, who was having a severe allergic reaction to medication and needed to be rushed to the hospital. “There was no one at home so my immediate reflex was to get an Uber to the nearest hospital,” Carl said. Although Carl was in extreme discomfort during his ride, Ryan did his best to keep him calm as he navigated to the nearest hospital.“After I rushed inside Ryan made sure the emergency room received my valuables — down to the coins which had fallen from my pocket into his car,” Carl said. “He even gave the hospital his number as an emergency contact just in case.”Ryan said that winning the Sixth Star Award was an honor, and he plans to spend the $1,000 American Express gift card on his kids. 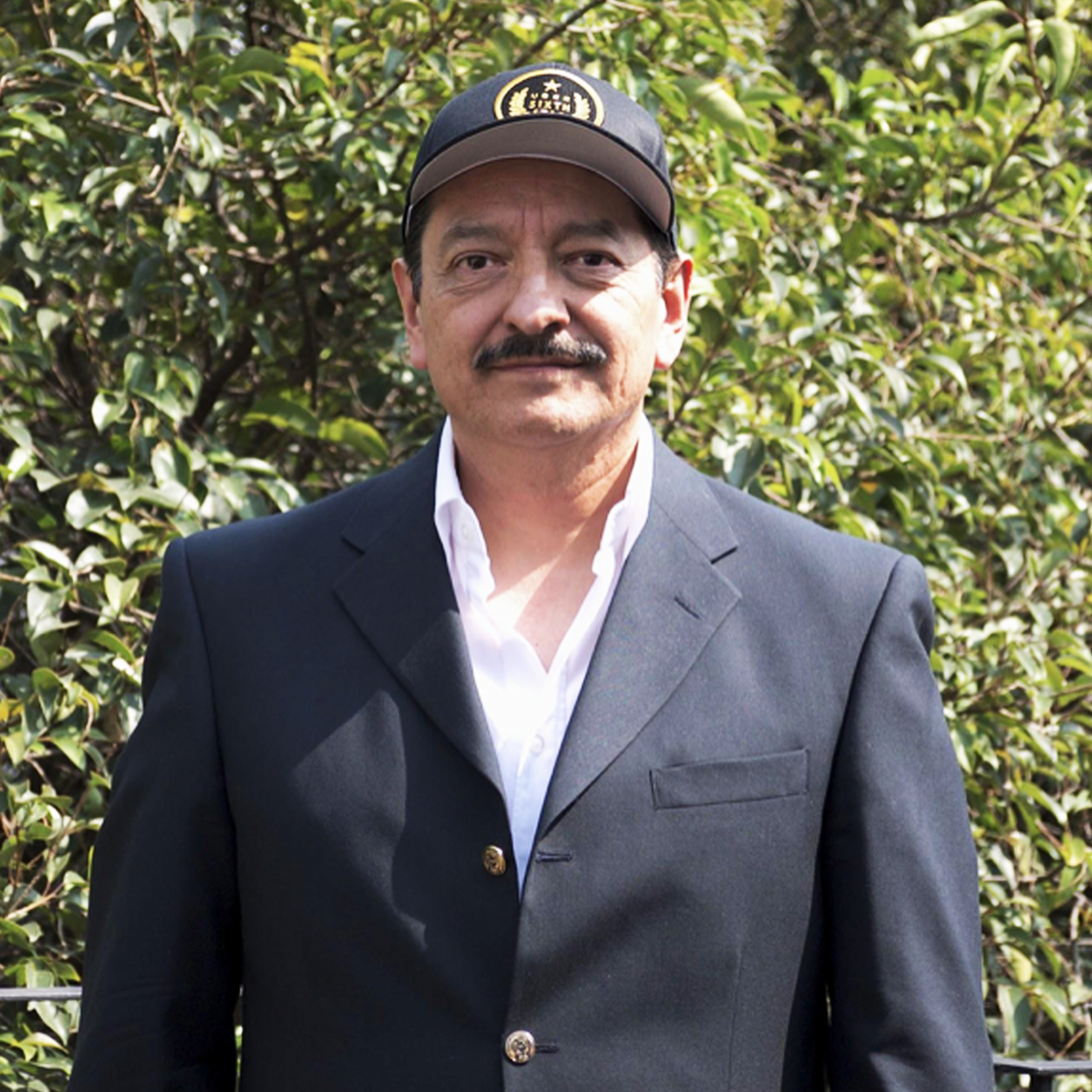 Meet Adrian from Mexico City, Mexico
Adrian was awarded the Sixth Star Award after navigating Mexico City through a massive teachers’ strike in order to get his passenger, Sanjiv, safely to his hotel.Adrian got Sanjiv as close to the hotel as he could. When the police insisted that he stop, Adrian got out of the car and personally escorted Sanjiv to the door of his hotel, through streets filled with protesters, policemen and camping tents.“Despite the closure of Mexico’s main avenue, Adrian got me to my hotel,” Sanjiv said. “He is the best driver in Mexico City.”“Even though I do not speak much English and he spoke no Spanish, I made sure he understood that I was getting him to the hotel safely,” Adrian said. 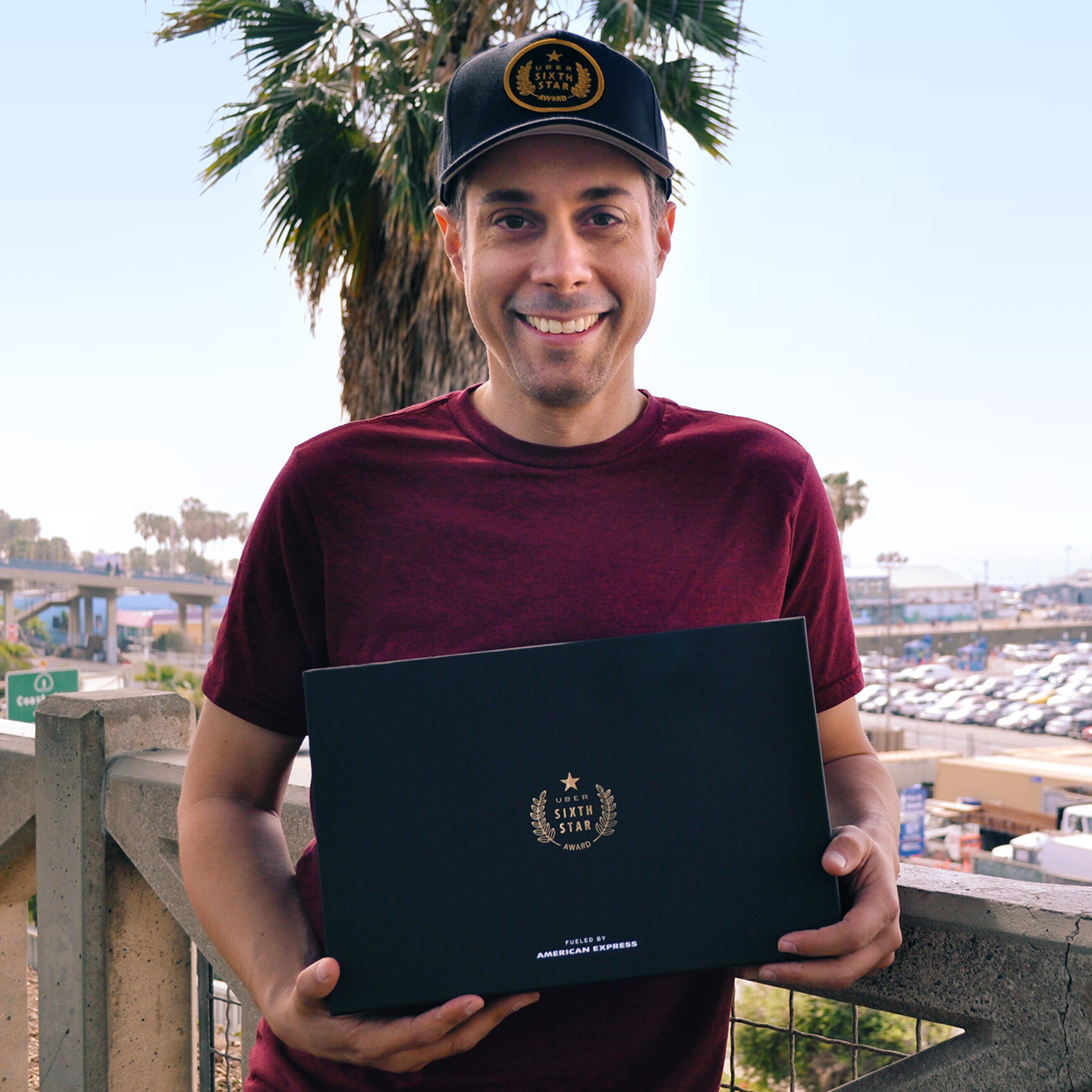 Brian has been driving non-stop in Los Angeles since he joined in October. A true road warrior, he has completed more than 2,600 trips and achieved a 4.96 rating – the highest on the West Coast. To ensure great experiences in his car, Brian says his biggest asset is being able to complement the energy that his riders give off.“I read the energy of passengers,” Brian said. “I’ve become a chameleon of sorts. If they want specific music, I change the music. Some people prefer not to talk. I respect that they want their quiet time.”Brian was excited to win the Sixth Star Award but for him the greatest reward is the interaction he has with his passengers.“[The Sixth Star award] kind of validates that I am having a very unique connection with my passengers,” Brian said. “By having so many different unique opportunities to meet with people, it makes a big city like LA feel so much smaller.” 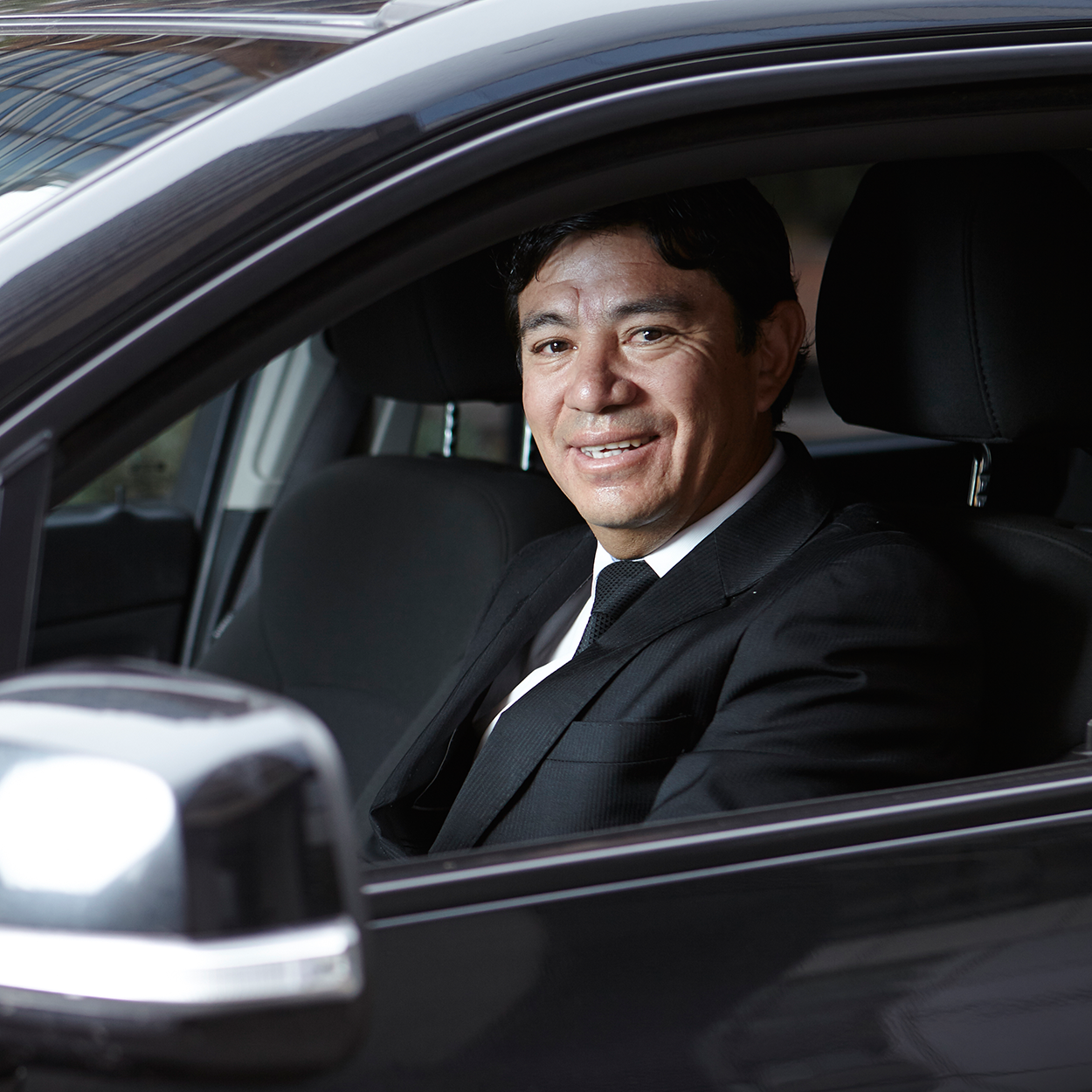 Meet Leonel from Santiago, Chile
In the year that he has been driving, Leonel has done more than 2,100 trips and achieved a 4.86 rating, which is the highest in all of Latin America. To provide great service, Leonel boils it down to three simple steps: first, maintain a clean vehicle and professional experience; second, open the door for passengers; and third, wait to make sure passengers make it inside their homes safely late at night. “If I do 20 trips, I will open the door 20 times,” Leonel said.Leonel was “truly moved” when he learned he won the Sixth Star Award. “This turned my world upside down,” Leonel said. “To be a part of Uber has been the best thing that has happened to me.” 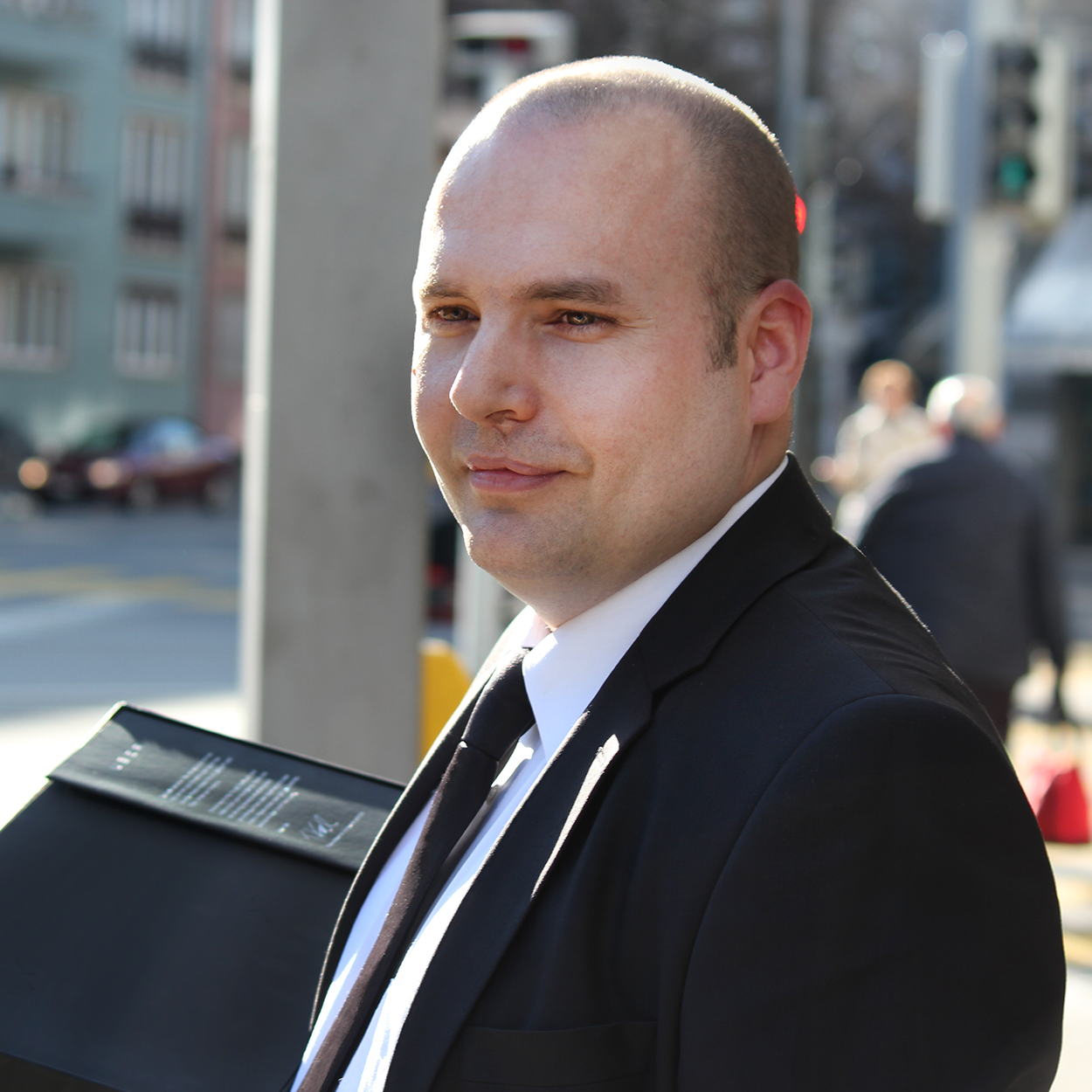 Meet Christian from Zurich, Switzerland
Since he started driving in June 2013, Christian has done more than 2,800 trips and achieved a 4.92 rating, which is the highest in the entire EMEA region. Christian loves driving as a profession and is the owner of a taxi and limousine company and has been an Uber partner since the launch of Uber in Zurich. What sets him apart? “I believe it has to do with two things: authenticity. I am super honest and direct, which I believe is the only way to be authentic. And most people feel that. The other thing that sets me apart from others is my love for the job. I simply love it.” 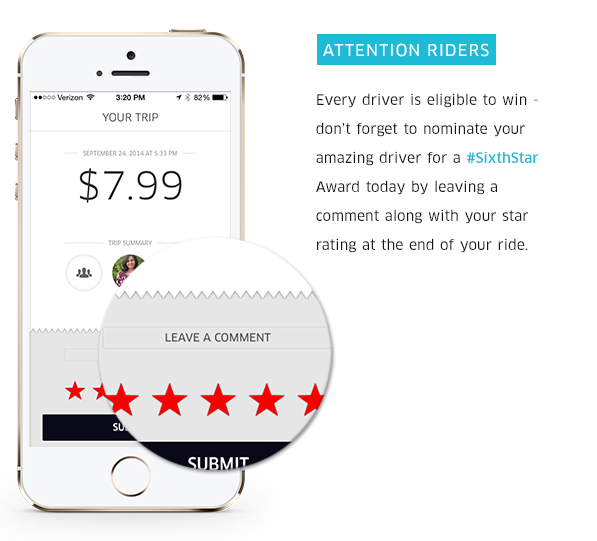