When he was just getting started in the culinary world, Luciano noticed how the Italian chef he worked for brought his community together through his food. Emboldened by this experience, Luciano decided to bring a taste of his home country to his Boston community by opening his own restaurant. What started as a take-out Brazilian restaurant named Oasis Steakhouse in a small town outside of Boston became a neighborhood staple over the years. Most recently, Luciano decided to take his food outside the neighborhood when his team heard UberEATS was coming to Boston earlier this year. By joining UberEATS to reach more communities, the Oasis team started delivering fresh Brazilian food to more neighborhoods in the area. The manager of Oasis, Alessandra, a Brazilian native herself put it this way: “whether you want to taste the flavors of home or want to adventure in traveling through the different cultures of Brazil, we surely can make it happen with a wide variety on the menu.”

Today, we are excited to surpass the 100th city mark by welcoming two Brazilian cities, Rio de Janeiro and Belo Horizonte, to the UberEATS family. 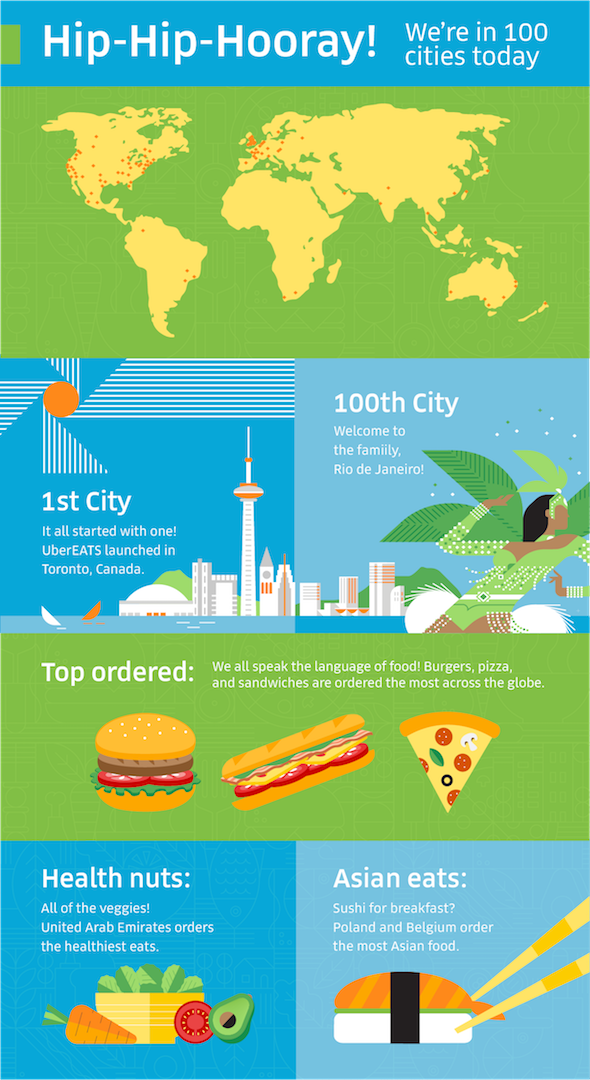 From Atlanta to Warsaw, people have truly embraced this  easy and reliable way to discover the food they love at the push of a button. Whether that’s an Indian inspired samosa, a good old-fashioned American burger or Vietnamese pho, people in 27 countries are using UberEATS to get a taste of the world’s flavors at the push of a button. For example, one of our most well-traveled and prolific fans has eaten her way through 22 cities in 6 countries through UberEATS. The most adventurous EATS fan has not had to travel very far to try 78 different types of cuisines from 162 restaurants.

This is a trend we’re seeing around the world, with most countries eating beyond their culinary borders. While some places like Brazil, India, Japan, Mexico and the United States really enjoy having their home country’s cooking delivered, the most popular cuisines in 18 out of 27 countries hail from another part of the world. In fact, Asian food tops the list for consumers in Poland and Belgium.  The most popular restaurants around the world, however, are serving up American classics, like burgers and sandwiches.

While we are growing to satisfy a global appetite, the essential ingredients that make this possible are the thousands of restaurant and delivery partners who connect people around the world with the food they love. And we are committed to mixing in the special sauce– the technology–that helps make food delivery easy and reliable for restaurants, delivery partners, and consumers.

Whether that means making our navigation system easier (these days earning on Uber doesn’t require a car) and delivery handoffs more intuitive for delivery-partners like Ching in Toronto, who holds the world title for delivering the most meals (more than 8,000 meals delivered and counting) or building tools to share data and insights with restaurant owners like Trung in San Francisco to make better decisions about his growing business, or even surfacing personalized recommendations for the millions of taste buds out there, we believe this is winning a recipe for connecting communities through food around the world.

We are all familiar with food delivery, be it calling your  pizza joint or indulging in late-night Chinese takeout. As we build out the vision for UberEATS, this stereotype is no longer the rule. In cities around the world, restaurants are offering their dishes, from salads to family recipes, to more customers all over their cities–whether they are at home, at the office, or the park. We are thrilled to bring together more than 100 cities where you can get a taste of home or travel to exotic places at the push of a button.