We all know that feeling too well: the moment when your stomach sinks, and you realize you’ve forgotten a personal item — in many cases, in your Uber. To recognize Uber’s most forgetful riders, and prepare for Mercury falling into Retrograde, we’re back with the second annual Uber Lost & Found Index.

The Uber Lost & Found Index is a snapshot of our riders’ most commonly lost and most surprising forgotten items. It also highlights which cities’ riders are most forgetful, and which days of the week people tend to be most forgetful.

Over the last year, we’ve seen phones, wallets, and keys top the list of most commonly forgotten items, with glasses, backpacks and e-cigs rounding out the top ten. But riders aren’t just leaving the usuals behind – they’re forgetting everything from divorce papers, to jetpacks, to rhinestone masks.

As for the most forgetful cities in the U.S.? DuBois, PA tops the list, followed closely by Athens, GA and Stillwater, OK. And which days and hours of the week are Uber riders most forgetful? The Index shows you’re most likely to lose something on a Saturday or Sunday – especially between the hours of 10pm-2am.

The full results are below. Take a look – they may surprise you!

10 Most Frequently Forgotten Items in Ubers – US

Most Forgetful Riders in US Cities:

We also took a look at the frequency that certain lost items were reported as missing – turns out, some items are more likely to be lost on certain days when compared to the rest of the week: 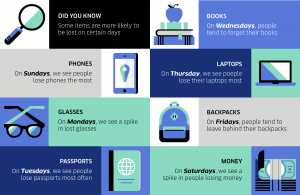 Most popular times of day to lose items:

Most forgetful days in 2017 (days items were reported as lost):

We’ve all been there: that moment of panic when you first realize you’ve misplaced an important, or even sentimental, personal item. If you’re one of those people who left something behind, look no further than this video, which outlines the simple steps you can take the next time you leave something behind in your Uber.

The best way to retrieve a lost item is to call the driver – but if you leave your phone itself in an Uber, you can login to your account on a computer. Here’s what to do: