We’re excited to team up with Cheers! on a new campaign to help Kiwis plan a safe night out this summer.

Together with Cheers we’re introducing the Sober Self Bot – powered by Facebook Messenger – to make it easier for riders to set and stick to their own curfew.

Cheers! Executive Director Matt Claridge said it was common for people to abandon their best laid plans after a few drinks with friends.

“The Sober Self Bot brings to life that original idea you had so that you can remind yourself of those plans,” Mr Claridge said.

“Maybe it’s that you wanted to get up early to go to the gym, or take the kids out for a bike ride, or catch up with mates.

“We’re hoping to engage with people, particularly young New Zealanders, through a channel they use every day to help them make better choices while out drinking.

“And what better person to remind you to get home than your ‘sober self’?”

We know it’s hard to form new habits. That’s why we’re offering discounted rides for those who plan and book a trip home with the Sober Self Bot between 5pm-2am on a Thursday, Friday and Saturday nights from now until 25 November 2017.*

Uber New Zealand General Manager, Richard Menzies, said he was pleased to partner with Cheers! on the Sober Self Bot campaign.

“We know many Kiwis are looking forward to letting their hair down as the year draws to a close and the weather warms up,” Mr Menzies said.

“The Sober Self Bot is all about giving Kiwis a fun and easy way to keep themselves honest when the perils of peer pressure kick in.

“We hope this will encourage more Kiwis to make better and safer decisions after a few drinks over spring and summer.”

Across New Zealand, Uber’s rush hour is not first thing in the morning or at the end of the day when people are getting to and from work, but late at night when bars close. 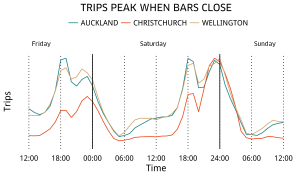 Our busiest times are typically Friday and Saturday night, when the availability of other forms of transport is in short supply. 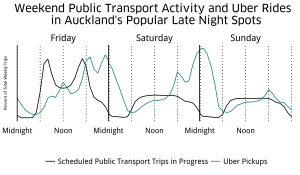 By providing a safe and reliable ride at the push of a button – no matter the time or place – ridesharing is helping make our cities better connected, easier and safer places to get around.