Today, we’re excited to announce uberCOMMUTE, an entirely new product for drivers.  It will launch in Chengdu, China — our number one city in the world.  uberCOMMUTE enables drivers who commute longer distances to share the cost of the trip.  It’s carpooling at the press of a button.

Drivers sign into the app and tell Uber where they are going.  We then show them requests from riders who are traveling in the same direction as well as the payment they will receive for the trip.  The driver can then decide whether to accept the request or not.  For riders, it’s Uber as usual.  They simply select People’s Uber+ (our Chinese UberPOOL service), input their destination and then our systems match them with a driver going the same way.

We’ve chosen China to pilot uberCOMMUTE — the first time we’ve launched a new global product outside the United States — because of the tremendous appetite amongst Chinese drivers and riders for creative new ways to get from A to B, affordably and reliably.  Over time we hope to adapt uberCOMMUTE for other cities around the world so that more people can carpool, helping reduce costs for everyone while also cutting congestion. 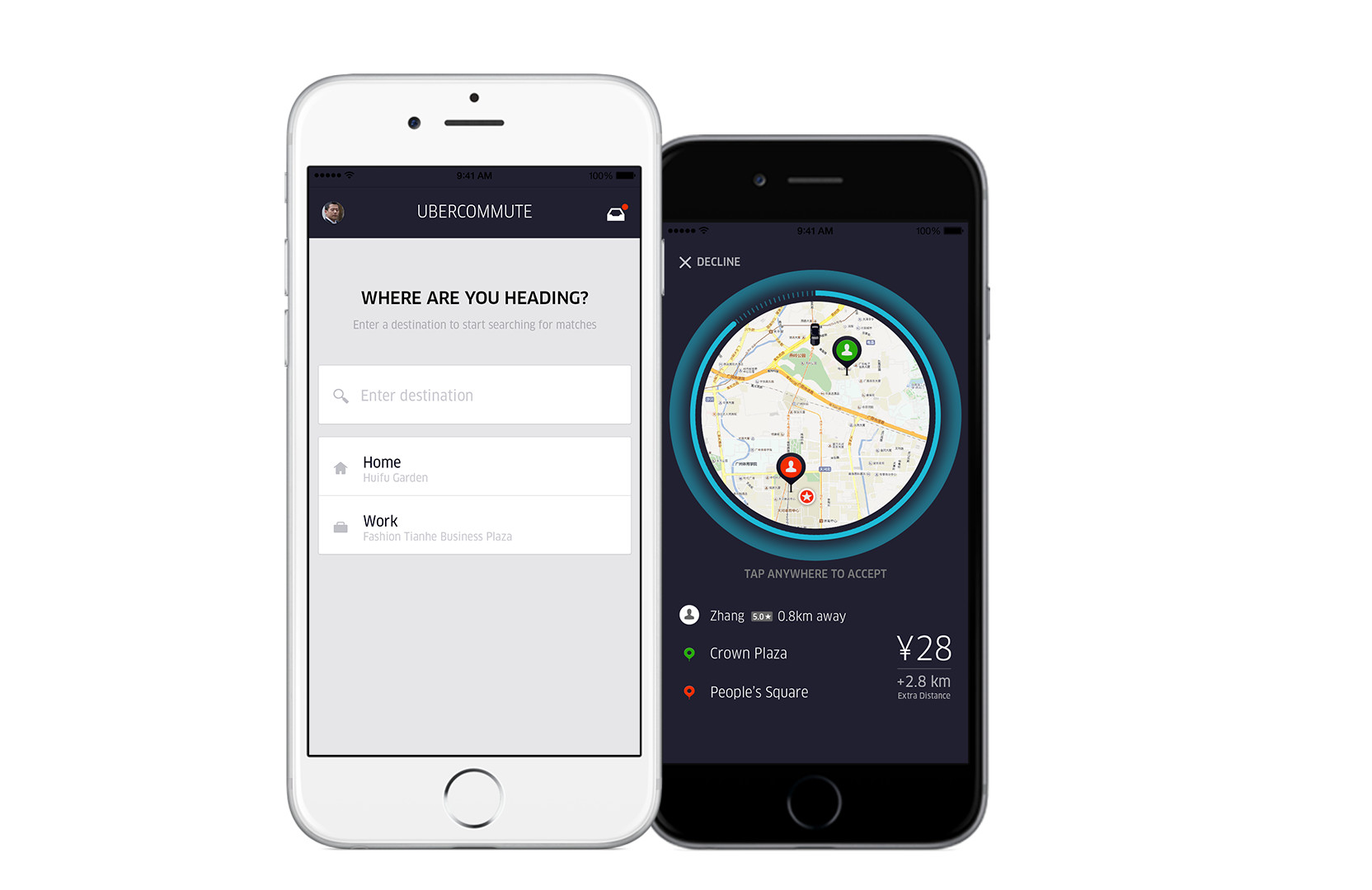 Visit most cities anywhere in the world and you’ll hear people complaining — often loudly — about roads  being gridlocked, especially at rush hour.  But there’s a real alternative to a world that looks like a parking lot and moves like a traffic jam.  Partly, it’s about better public transportation, though this takes time and not everyone can live near subway or bus stop.  It’s also about new technology because services like Uber can help use the existing infrastructure more efficiently today.

When people can push a button and get a ride in minutes they are less likely to drive themselves — so instead of thirty people using their own cars, you have one car serving them all.  But that is just the start.  In many cities, such as San Francisco, New York, Chengdu or Paris, so many people now use Uber that there are a ton of duplicate rides — passengers wanting to get to the exact same place at the exact same time.  With services like uberCOMMUTE and uberPOOL we’re making it possible for them to share the ride.

It’s why we’re so excited about this pilot and the ongoing roll-out of uberPOOL around the world.  Earlier this year, we launched in five Chinese cities — Chengdu, Hangzhou, Shanghai, Guangzhou and Shenzhen — as People’s Uber+.  And this week we announced our first launch in India — which means uberPOOL is now in 12 cities around the world.

Uber started out to solve a simple need:  the need to get a ride.  We have since seen a way to help with one of the biggest challenges our cities face:  congestion.  By making it easy and affordable for people to share rides, we can create affordable, efficient alternatives to individual car ownership.