It’s rare that we get the time to take a look backwards here at Uber NYC, but sometimes there’s a story hiding in our data that’s worth spending the time to share. September 2014 marks our third September since the launch of uberX in New York. With three years of data, we’re able to highlight the ‘big picture’ trends that are shaping the way uberX works for both riders and drivers.

The story that most riders already know is that our fares this year are lower than ever, making Uber both the highest-quality and most affordable ride on the road. The graph below shows the average fare for a trip taken on uberX in September, 2012, 2013, and 2014—the three months we’ll be using for comparison for the rest of this post. uberX fares were cut 20% between September 2013 and 2014, leading to huge growth in demand and a reduction in the average fare, as shown in the chart below. 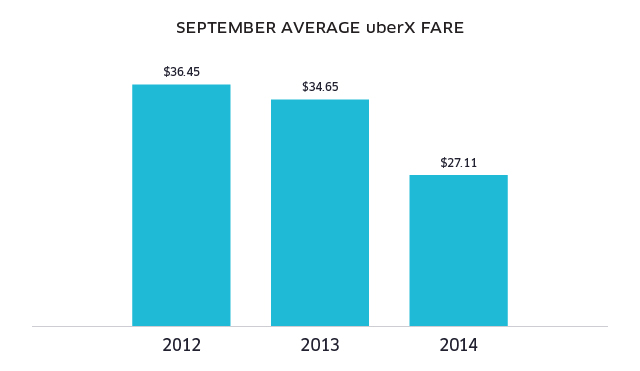 That story is pretty well known. What’s less well known, however, is how driver earnings changed over the same period in time. That information is shown below. 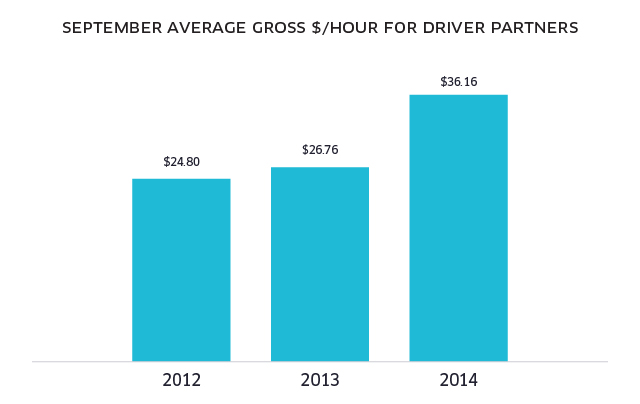 The results are clear: uberX partners are earning more per hour than ever before. But, wait, how is it possible that uberX riders can be paying less while drivers are making more? It’s simple: The Uber network is getting much more efficient, helping make each hour a driver spends logged into the Uber system more valuable than it’s ever been.1

To understand how, we can look at what a typical driver hour looked like on uberX in September 2012, 2013, and 2014. A driver who is ‘online’ and logged into the Uber app can be doing one of three things: idle while waiting for a trip, on their way to pick up a rider,2 or carrying a rider to their destination. Driving with a rider in the car is the only time that a driver is earning fares. In other words, the more time drivers spend with riders, the more they can earn per hour. So, what did a typical driver hour look like in each of our three years?

As you can see, the typical uberX partner now spends almost half of their time with a rider in a given hour, compared to only a quarter of their time two years ago. In other words, rather than sitting idle, drivers are earning fares for a much greater portion of their time. As a result, drivers are able to log less hours while making the same amount of money as they did before.

What’s behind these changes? The answer is that drivers benefit from the liquidity of both more riders and more drivers. Having a large marketplace of both riders and drivers means that drivers are typically much closer to a rider requesting a ride than in the past. This makes pickup times shorter, as shown below. 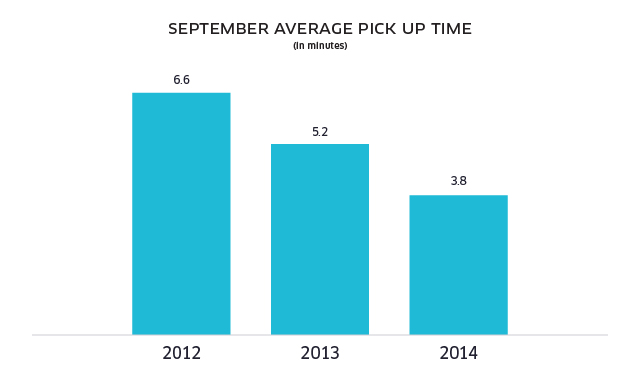 The average rider is now getting picked up almost twice as fast as they were two years ago (3.8 minutes versus 6.6 minutes), making each ride with Uber more convenient than ever. Drivers benefit from these shorter pickup times, too. Shorter pickup times mean that drivers can spend more time with riders in the car, earning fares. In other words, a bigger marketplace is a win for both riders and drivers. As uberX continues to grow in New York, we expect these beneficial effects to only get stronger over time.

Hope you enjoyed our look back at three beautiful falls in NYC. Stay tuned for more posts about #uberdata in New York City.

2 This includes any wait time at the rider’s location before starting the trip.

A new pickup experience at LGA

A new pickup experience for Uber Black trips at LGA, Terminal B