Entrepreneurs, visionaries and self-starters–your big break is arriving now. On April 7, from 11am to 3pm, you have the chance to make your passion a reality. Request UberPITCH and we’ll bring you one of Canada’s top investors, ready to hear your big idea.

UBERPITCH BRINGS INVESTORS TO YOU

UberPITCH is a collaborative project that facilitates innovation within local startup communities. We are pumped to help connect local entrepreneurs with the resources they need to accelerate the growth of their ventures.

Have an idea you’ve been working on? Now’s your chance! 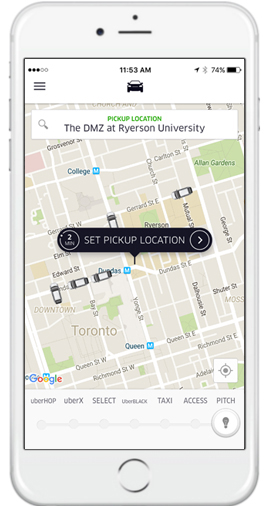 Scott Bowman is an entrepreneur and a leader in the field of youth business development. Scott is an entrepreneur, having launched a business focused on supplying logistics to large competitive fitness shows across North America. Scott took his entrepreneurial skills to Futurpreneur Canada in August 2010 to take on the role of Director, Government Relations. He actively promoted the concept of entrepreneurship as a key component to help solve youth unemployment to governments’ across the country. As well, he was instrumental in securing funds from various levels of government for the organization. Since July 2012, Scott has lead the Futurpreneur team in Ontario as Senior Director. Since taking the lead of the Ontario team, he expanded the size of the team, extending their reach into communities across Ontario which has allowed Futurpreneur to achieve a 158% increase in the number of young people assisted through the organization in Ontario. Scott today continues to focus on building opportunities to help more young Ontarians become business owners.

Michael Hyatt is a serial entrepreneur who built two highly successful technology firms valued in the hundreds of millions. Michael ranks as one of Canada’s top entrepreneurs, is a celebrated “Dragon” on CBC’s new sensation Dragons’ Den – Next Gen Den, and is a weekly Business Commentator on CBC News Network. He is the Executive Chairman of Bluecat and on the Advisory Board of Georgian Partners. Michael is also a Founding Partner at the Rotman School of Business Creative Destruction Lab and also mentors at the Founders Institute. Michael was a finalist in Ernst & Young’s Entrepreneur of the Year Award, a recipient of the Top 40 Under 40™ Award, and chairs his family’s charitable foundation. Michael is an active investor, philanthropist, and a speaker with Speakers.ca and the National Speaker Bureau.

Tim Jackson is the EVP Corporate and Community Development and Lead Executive, MaRS Centre for Impact Investing. He comes to MaRS most recently from the University of Waterloo, where he served as the vice-president of university relations, with responsibility for the offices of communications and public affairs, government relations, and community relations and events. Tim has an extensive background as an entrepreneur and business leader. A founder and partner of Tech Capital Partners (an early-stage venture capital firm), he served as CFO and CEO at Waterloo tech firm, PixStream. He has also served as CFO, CEO or board member for numerous technology companies and other organizations.

In his role as Director at OMERS Ventures, Brian Kobus is responsible for contributing to the identification and execution of investment opportunities for OMERS Ventures in the Technology, Media and Telecommunications (TMT) sectors. Brian brings 15 years of experience in the areas of technology, venture capital and finance to his role at OMERS Ventures. Previously, Brian was VP Technology Alliances at ScribbleLive, a leading content marketing software-as-a-service platform, where he was responsible for establishing, managing and growing relationships with partners. Prior to joining ScribbleLive, Brian was with Summerhill Venture Partners, a TMT-focused venture capital firm where he worked closely with a number of successful high growth companies. Earlier in his career Brian worked on numerous M&A and financing transactions, first at Morgan Stanley and then at Bell Canada Enterprises.

Victoria is the co-founder and CEO of Startup Canada, a grassroots network of entrepreneurs working together to build an environment for entrepreneurship in Canada. She is recognized by the United Nations Development Programme and the European Union as one of the foremost experts in entrepreneurship education; ecosystem and program architecture, governance, development and implementation; and, in fuelling entrepreneurship movements and awareness campaigns.

She is the first Canadian and one of the youngest recipients of the Queen’s Award for Enterprise Promotion. As a student at the University of Oxford, Victoria won the award for having pioneered a grassroots youth entrepreneurship movement in the UK called NACUE. Today NACUE is central to the UK’s youth entrepreneurship ecosystem, supporting more than 55,000 higher education students and graduates across more than 100 institutions.

Joe Mimran is a retail, fashion, and business pioneer who has founded some of Canada’s most iconic brands: Joe Fresh, Club Monaco, Caban, and Alfred Sung. He’s now a Dragon on CBC’s hit show Dragons’ Den. In 1985 he founded Club Monaco successfully expanding the store network across Canada, United States, and internationally. In 2000 he sold the company to the Ralph Lauren Corp. which to this day has maintained the design ethos of the brand.

As founder and former Creative Director of Joe Fresh, Joe Mimran oversaw the brand’s design and retail concepts, and made it Canada’s second largest apparel brand. Mimran conceived the Joe Fresh brand, for Loblaw Companies, with a vision of well-designed, well-priced clothes for a broad audience. It was launched in 2006, in 40 supermarket locations. Today, Joe Fresh is sold in approximately 350 stores in Canada and internationally.

Matt is an investment professional in the IT Venture Fund at BDC Venture Capital where he primarily focuses on the fund’s early stage Seed and Series “A” opportunities. Some of Matt’s most prominent investments are Flatbook, Crowdriff, Crew and Unsplash. Matt joined BDC after he raised the Seed and Series “A” round for Semiconductor startup GaN Systems which he joined after graduating. Prior to this he was an Analyst at Venture Capital firm Wesley Clover, best known as billionaire entrepreneur Terry Matthews investment group. While there Matt coordinated internal operations and facilitated the growth of many seed based start-up companies. He also co-founded and acted as CEO at his own startup, JohnnyVoIP, a company that developed a web based VoIP application platform. Previous to this he was the Business Development & Strategy lead at an Ottawa based startup investor (SeedCapital.ca) and at eighteen was the youngest Project Coordinator (Manager) at Newbridge Networks working in the LMDS wireless group (now part of Alcatel Canada).

Michele is a current Dragon on CBC’s Dragons’ Den and this year WXN ranked her in the 100 Most Powerful Women in Canada. Michele was the Co-Founder of SnapSaves, which was acquired by Groupon. Previously, Michele was the Co-Founder of Buytopia.ca, a Canadian ecommerce leader ranked #3 on the Profit Hot 50 list of fastest growing companies and ranked #1 on Chatelaine’s W100 list of fastest growing companies. She is a Forbes “Millennial on a Mission”, a finalist of the EY Entrepreneur of the Year award, and the RBC Canadian Women Entrepreneur Awards. Michele was previously the Director of Strategy for Sears. Michele holds an engineering degree and an MBA from Queen’s University where she received the Queen’s Tricolour. She is a director on the board of Whistler Blackcomb (TSX: WB) and Shad Valley.

ExpressMatch: the next evolution in rider experience

Toward a zero-wait future: airport Prematch

From a “lot” to a little: Uber’s efforts to reduce waiting lot usage