How London responds to travel without the Underground

With 4 million journeys taken on the London Underground every day, it’s no surprise that when it shuts down on a busy weekday, travelling around London is difficult. We’ve crunched our data to see how London responds to a strike.

The Thursday morning of the strike was the busiest time Uber London has ever seen. We had prepared in advance of the strike, encouraging all our partner-drivers to be available to help Londoners get around the capital but the level of demand surprised us too. Requests started building from 7am from across the city. 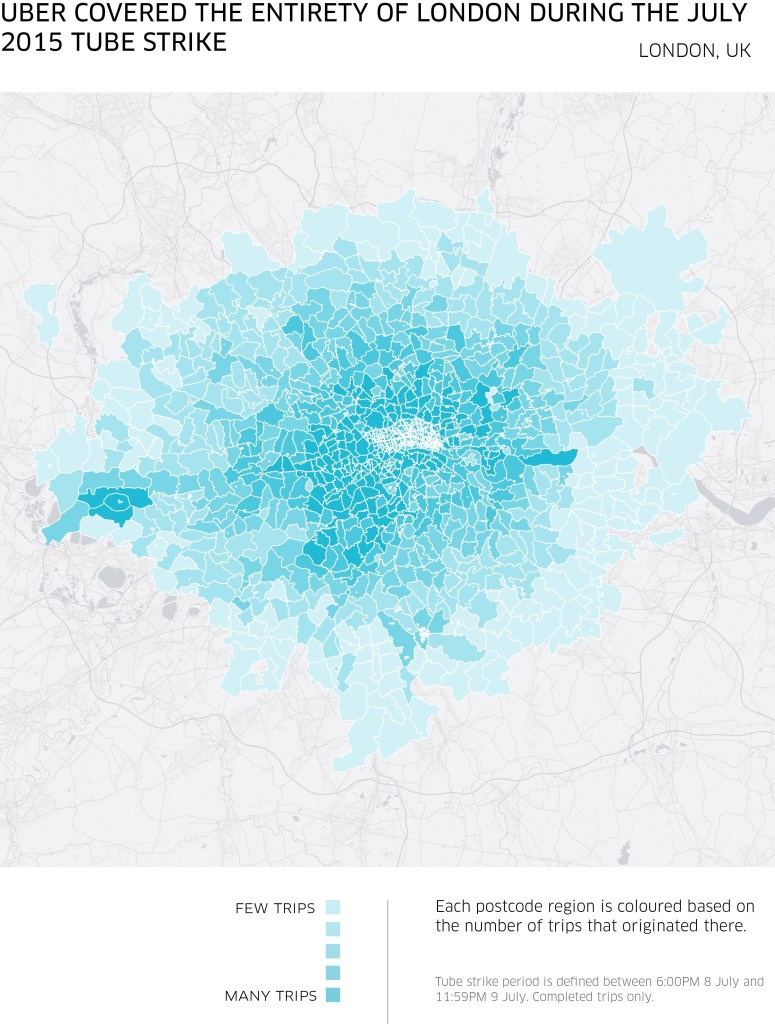 Thousands of Londoners use the Underground to commute in the morning so, with the tube out of action, many more requested a car to get to work. The results showed just how well the tube network typically serves central London as 13% of all trips during the tube strike started and finished at a tube station. 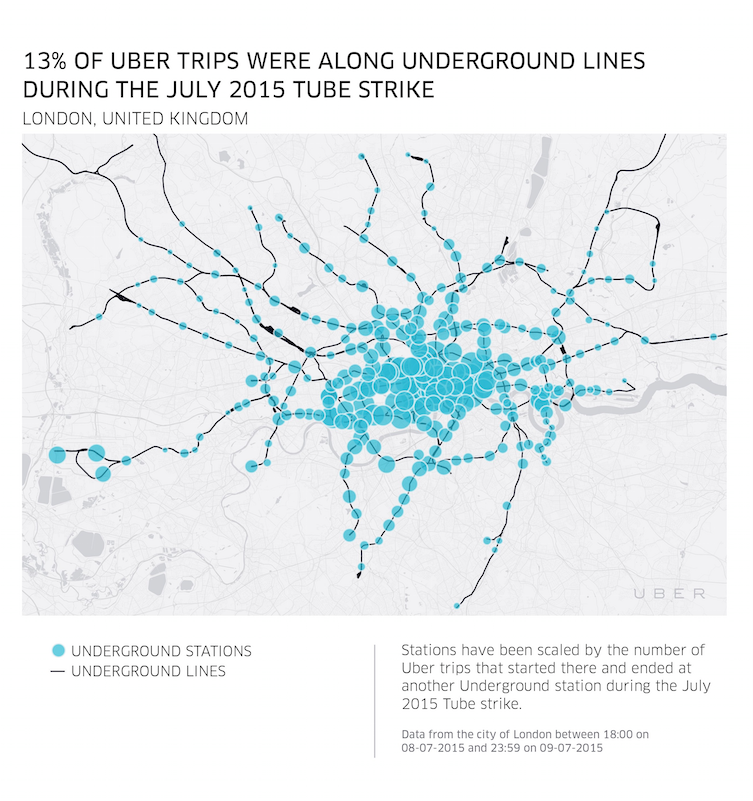 As well as all those Londoners who use the tube to get to work from their homes, millions of commuters take the train into one of London’s transport hubs and then continue from there by tube or bus. We saw our highest demand around London’s busiest train stations, showing that it wasn’t just those who live in London but also those who work here that turned to Uber to complete the last mile of their journey. 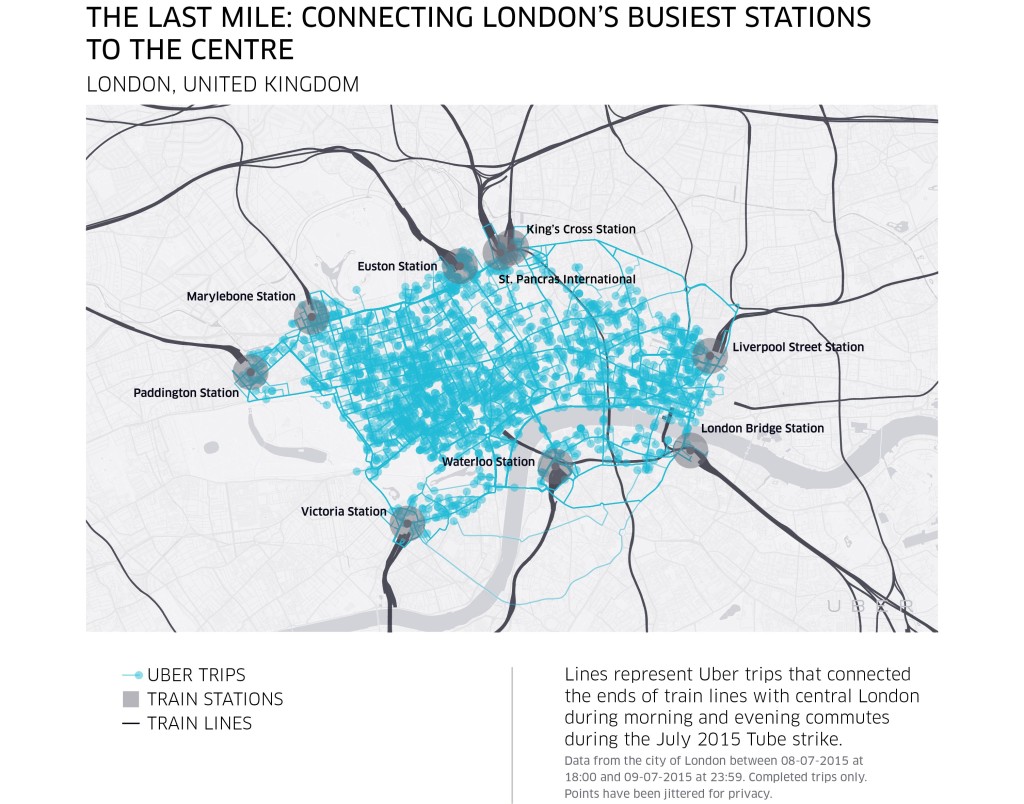 As TfL laid on more buses, thousands of cyclists hit the streets and many more Londoners were forced to drive their own cars into central London, traffic slowed across the city. Uber’s data indicates that traffic speeds were on average 17% slower throughout the day, compared to a normal Thursday.

Double the usual number of Uber partner-drivers were out to help more than a hundred thousand people get to where they needed to be. Our system of dynamic pricing (which comes into effect when demand massively outstrips supply to encourage more drivers, who work with Uber on a fully-flexible, non-exclusive basis and as much or little as they want, to come out to work) ensured that, unlike any other private hire or taxi company, Uber remained a reliable option for Londoners throughout the day.

Thousands of Londoners did their bit to keep the city moving by sharing their Uber journey with someone else too. There was a 28% increase in the number of fares split between passengers. 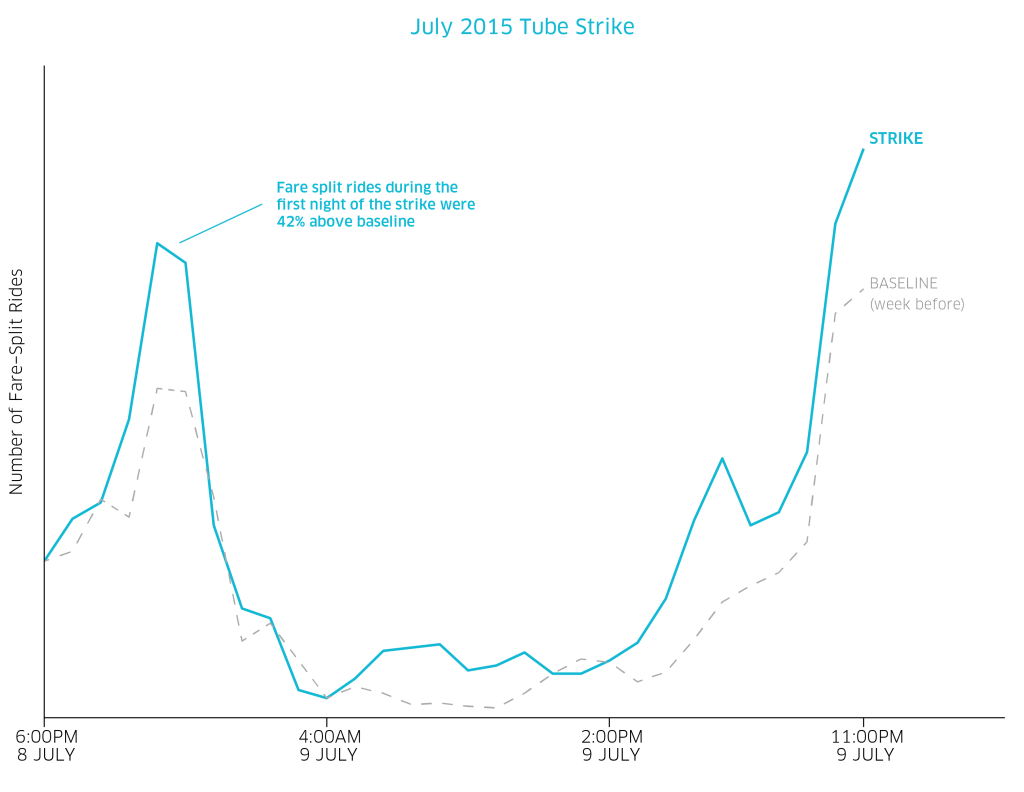 The highest number of split fare journeys came from Mayfair, Knightsbridge and Shoreditch as riders shared their journeys with friends or colleagues, reducing the numbers of empty seats and freeing up thousands of cars for other Londoners wanting to get home.

But there is the potential for so much more. 15% of all trips taken during the tube strike had a sister trip: a trip that started and finished within 500 metres and five minutes of it. Effectively, a trip that traced the same route at the same time; a trip that could have been shared.

With talk of another 24 hour tube strike starting on 5th August, travel troubles are set to hit our city again. We’ll be working hard to ensure we’re a reliable option for Londoners throughout the day yet again. But, by sharing the journey and splitting the fare, we can make every car on the platform go further, reduce empty seats, cut emissions and get everyone where they need to be.

So find a friend, a family member or a colleague and share the journey, split the fare and free up a car to #KeepLondonMoving.

We’re here for you, London!

And on that note, the most-played song that got us through the tube strike and the traffic? Are You With Me by Lost Frequencies.

Giving a boost to employee morale with meal delivery