Have you ever wanted to peer into a crystal ball and see what the future looks like? Now’s your chance! As a part of the campaign to bring ridesharing to BC, we’re launching a “Future View” for British Columbia.

Open the Uber app and drop your pin in Vancouver, Victoria, or Kelowna to see virtual cars with wait times of five minutes or less. Unfortunately these cars are frozen, almost like progress on ridesharing regulations. Send an email to urge Christy Clark and the BC government to break them free and make ridesharing a reality in our province. 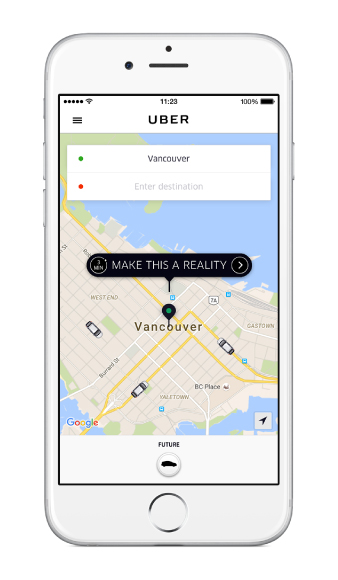 To date, British Columbia remains the largest jurisdiction in North America without ridesharing. While cities like Toronto, Ottawa, and even our neighbour Bellingham enjoy the benefits of Uber, our province is falling behind.

Premier Christy Clark and the BC government have the opportunity to establish British Columbia as a forward-thinking province and craft sensible ridesharing regulations that:

Let’s stop falling behind, and start being the global leader in technology and innovation that we’re meant to be.

(You can read more about the need for smart ridesharing regulations in our letter to Premier Clark here.)

Enjoy a stress-free holiday with help from Uber